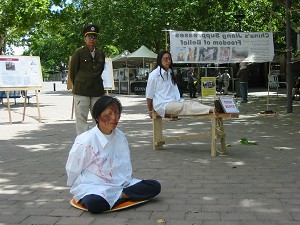 Somewhere in the world, the warm fire crackles as giggling children, adorn their Christmas tree with the colourful lights that William Huang made in jail. A United States living room is coloured with the ornamental flowers he put together, glitter sticking to the sweat on his body, bursting calluses on his hands. Others, somewhere in Europe, chat and munch on the pistachio nuts that he pried open with pliers, or clambered over to use the open toilet, in the bedroom-sized production room that was home to over 20 prisoners.

Surely greater things awaited William when he graduated from China’s prestigious Tsinghua University in July 1999, than slaving seven days a week, for more than 16 hours per day, producing cheap Chinese goods in a Chinese “re-education through labour” center. At least he can choose his destiny now, living and studying in the United States. But memories of electric batons, brainwashing sessions and sleep deprivation don’t easily fade. Nor do the memories of his colleagues who are still in jail.

William Huang, whose Chinese name is Huang Kui, came to America in March this year, with fresh memories of what had happened to the first group of The Epoch Times workers in China, who suddenly disappeared on December 16, 2000. He and around ten others, mostly Falun Gong practitioners, had rented a flat in Zhuhai city, in Guangdong province, which became the underground office for the fledgling online publication. There were people in other cities helping as well, pitching in with time, or money, or both. His job was researching and writing international news articles, while others focussed on weighty domestic issues, especially the state’s full-scale persecution of the Falun Gong meditation practice.

He has no idea how the police found them, but one day without warning more than ten policemen burst in, arresting everyone and seizing all equipment. 48 hours of sleep deprivation and interrogation followed. He and the others were charged with “subverting the political power of the state” because they had published articles exposing the Chinese Communist Party’s (CCP) human rights crimes.

William was moved to the 2nd detention centre in Zhuhai whilst awaiting sentence, and he was interrogated almost every day for half a year, sometimes until 2am. He was then put to work, laboring at least 16 hours each day making ornamental flowers, Christmas lights, pearl decorations, and prying open pistachio nuts. At first they used pork oil for part of the flower-making process, but the guards soon ordered them to stop, as it would attract bugs that would damage the goods while in transit to the United States. He remembers the cold November days of 2001, when large, painful cracks formed on his hands.

After three months he had still not been sentenced. Lacking any formal appeal mechanism, he refused to eat. After five days without food or water, the guards chained him to a cross made of wooden planks. They pried his teeth open with metal pliers, pinched his nose, held his throat open with chopsticks and threw lumps of rice porridge into his stomach.

From time to time he caught glances of other The Epoch Times workers in prison, and he once had a chance to talk to Zhang Yuhui, who was chief editor when the arrests took place, and who is still in jail. Zhang told him that he had spent 7 days and 7 nights on the “Tiger Bench” torture implement, for refusing to inform on others. While Zhang did not elaborate, this method is known to involve forcing a person to sit with legs extended on a long, thin bench, with ropes tying the knees to the bench. Objects are then forced under the legs to bend the knees the wrong way, causing extreme agony. Zhang had also spent three days tied on a cross, in a contorted position.

William was finally sentenced on September 9, 2002, after almost two years of open-ended detention. He had been given five years’ jail, and was taken to Sihui prison in Guangdong Province. The slave labour was just as exhausting, this time producing high-quality sweaters, as well as rattan chairs and baskets. He tried refusing to do the work, but was forced as punishment to squat non-stop for three days. Another time he refused to kneel in front of several hundred assembled prisoners, so the guards kicked him to the ground and assaulted him with more than 12 high-voltage electric batons, causing his body to violently contract and convulse.

However, Sihui had something even worse planned for William: brainwashing sessions. He was jailed with eleven hardened criminals, who were made personally responsible for watching over him. If he refused to give up his faith in Falun Gong, the prisoners would be deprived of daily comforts, making them hate him with a passion. They would watch his every movement, and accompany him to the bathroom. He wasn’t allowed to talk to other Falun Gong practitioners, or even exchange glances.

Having labored all day, when night came he was forced to watch videos and read books that slandered Falun Gong. Then someone would come to talk to him, to try to convince him to give up the practice. Thrown into the mix was sleep deprivation. For a whole month, the propaganda sessions lasted until 5.45am, and he was only allowed to sleep until 6am. Prisoners took turns to watch him. Sometimes he would fall asleep standing up, but the prisoners would shake him awake.

“For you Falun Gong, it is always legal no matter how we torture you,” said the guards to him. “If you do not give up Falun Gong, you have only one end-death.”

After three years at Sihui, William was released on December 15, 2005. Two police escorted him back to Tsinghua University. Nobody would employ him after his time in jail, so he focused on his studies and won a scholarship to Ohio State University. For security reasons he left without telling his friends or parents.

William is active in America, telling his story to those who will listen. He hopes Zhang Yuhui and Shi Shaoping, each sentenced to ten years, will be released soon from the hell that he experienced. He says he has seen in shops the exact same sweaters, flowers and rattan chairs that he used to produce, all at bargain prices. But he knows full well the human cost of these items.