Majority disapprove of torture, 1 in 10 favor in any instance

(Torture those in favor of torture first, then ask them again. – The Infinite Unknown)

WorldPublicOpinion.org poll put the United States alongside countries like Russia, Egypt and the Ukraine and lagging far behind allies like Great Britain, Spain and France in how its citizens view torture.

The poll found 53 percent of Americans believed all torture should be prohibited; the average in all 19 countries polled was 57 percent. 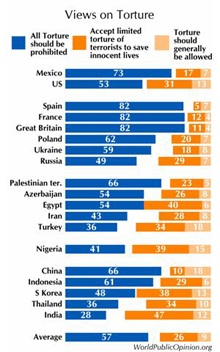 “The idea that torture by governments is basically wrong is widely shared in all corners of the world. Even the scenario one hears of terrorists holding information that could save innocent lives is rejected as a justification for torture in most countries,” Steven Kull, director of WorldPublicOpinion.org, said in a press release.

“Further,” Kull adds, “since such a scenario is exceedingly rare, this poll suggests that virtually all torture used by governments is at odds with the will of the people.”

Since its last global survey in 2006, WorldPublicOpinion.org found that torture was becoming more acceptable in the US. Support for torturing terrorists grew from 36 percent, and the majority of those opposing torture fell from 58 percent.