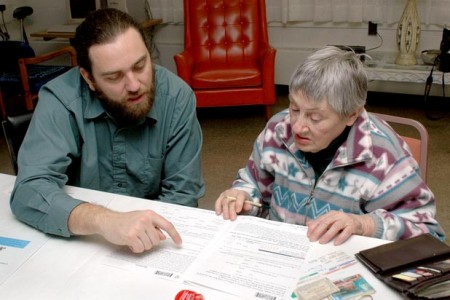 (June 17) – Swamped by debt and rising medical bills, elderly Americans have been seeking bankruptcy-court protection at sharply faster rates than other adults, a study to be released Tuesday indicates.
From 1991 to 2007, the rate of personal bankruptcy filings among those ages 65 or older jumped by 150 percent, according to AARP, which will release the new research from the Consumer Bankruptcy Project. The most startling rise occurred among those ages 75 to 84, whose rate soared 433 percent.

The study did not address the specific reasons behind the trend. But experts say medical bills have played a major role in the debt that has forced many elderly Americans into bankruptcy proceedings.

“Health care is a big issue for the elderly,” says George Gaberlavage, director of consumer and state affairs at the AARP Public Policy Institute. “And out-of-pocket expenses have been going up.”

As a result, Gaberlavage says he thinks health care is the single biggest cause of the rise in filings.

The 2007 statistics are based on a national sample that included 2,435 responses from bankruptcy filers. It’s the first in several Consumer Bankruptcy Project reports supported by AARP, which will later study and spell out the individual factors behind the increase.

The number of personal bankruptcy filings for all age groups declined after a stricter new law took effect in 2005. Still, when the filings from 2007 were compared with those from 1991, those of older Americans, as a percentage of all filings, have surged.

“In past generations, older Americans were more financially secure,” says Elizabeth Warren, a Harvard Law professor and co-author of the Consumer Bankruptcy Project study. “Now, instead of going into retirement loaded with assets, Americans are hitting their retirement years loaded with debt.”

For the elderly, bankruptcy is a particular concern because it’s typically harder for seniors, usually lacking in well-paying job opportunities, to climb back out of it.

“They have so little time to start over and build up savings, and they have few or no job opportunities,” says Susan Reinhard, director of the AARP Public Policy Institute. “The connection between health and economic security is a big issue for older Americans.”