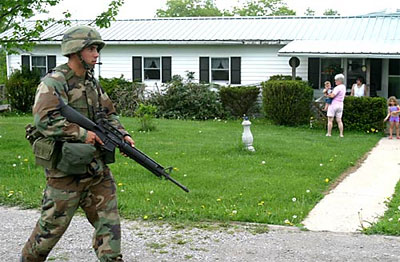 For over two weeks 2,300 Marines have been using the city of Indianapolis and its civilian population as a “simulated urban combat zone” under the direction of FBI and the Department of Homeland Security.

The exercises began on June 4th when Mayor Greg Ballard surrendered 26 sites around the city. The corporate press, Marine spokesmen, and officials with the city of Indianapolis have all been using the same talking points in an attempt to pacify local citizens and moderate any dissent. The official story has been that the 26th Marine Expeditionary Unit is here to do pre-deployment training in a realistic urban environment. Col. Mark J. Desens, the unit’s commanding officer, said “Our aim in Indianapolis is to expose our Marines to realistic scenarios and stresses posed by operating in an actual urban community. The city’s new mayor Greg Ballard concurs with the commander saying, “I think it’s very good training for them…actually, city fighting, urban fighting is really the most dangerous type of fighting there is.”

But the cover story has several obvious flaws, as the Marines have a multitude of facilities in which to experience “realistic scenarios.” To begin Camp Lejeune is home of MOUT Military Operations Urban Terrain or urban combat training village, modeled after an Iraqi town. Located in Kuwait is a high tech realistic urban MOUT training facility (watch video) covering 30 acres and costing taxpayers 15 million to build. The FBI in Quantico, VA has an extensive “Hogan’s Alley,” urban combat training center where the Marines could practice for pre – deployment and fire live ammunition.

In fact live fire exercises are the preferred and usually required type of training for units deploying to combat zones, the Army performs this type of training at the Joint Readiness Training Center in Fort Polk Louisiana. The JRTC offers improved unit readiness by providing a highly realistic, stressful, joint and combined arms training across the full spectrum of conflict, current and future. Perhaps the biggest flaw in the cover story being sold by the controlled press and others is that, “Most of the Marines with the 26th MEU are Iraqi combat veterans.” according to Col. Hill of Camp Lejeune.

While the Marines and their spokesmen are being put front and center for public consumption the “terror drills” they are conducting have been set up by the FBI under TAMACOR. The TAMACOR program is designed to integrate federal and state law enforcement agencies with the USMC. Taken from a Department of Defense memo, “The TAMACOR Program supports the FBI by coordinating regional FBI SWAT training during USMC special operations training on non-DoD facilities.” Under TAMACOR the Marines have been training to perform law enforcement functions since 1992 when the FBI and Marines formalized the agreement with the signing of the initial MOU, Memorandum of Understanding. Civilian authorities and their appointed agents have been using these MOU’s to weaken Posse Comitatus over the years, initially using the War on Drugs as their justification.

Compartmentalization and keeping people in the dark about training Marines in a police role seems to be a major objective of these exercises. This is evident in the stream of propaganda coming from civilian authorities and the controlled press these last few weeks. From the Indianapolis Star we are told, “Indianapolis residence hoping to experience a bit of shock and awe.” Mark Casey a local Indianapolis blogger says, “A word to the Indianapolis wise [see if you like martial law you are “wise.”] … when you see that formation of helicopters flying low over your back yard this week, remember that its only a drill!”

According to the Indianapolis Mayor there is really no need to be concerned. “I don’t think it was necessary for any citywide meetings on this,” Ballard said. “The neighborhoods will be well-informed on what’s going on.” Perhaps some meetings would have been beneficial since the owner of one the surrendered sites, Rich Banta was not told about the plans. Banta said, “That it [Eastgate Consumer Mall] is a construction site … I’d hate to see a Ray’s Trash truck run into a helicopter.” When speaking to another city official a little bit of truth slipped out when Debbie Fletcher of the Indianapolis/Marion Country Emergency Management Agency said, “We don’t want anyone thinking that there’s an invasion happening or that we declared martial law or something like that.”

Due to alternative press coverage and public awareness much of what the FBI and DHS had planned for the citizens of Indianapolis has been scaled back or cancelled. Marines did execute a mock terror cell raid on and occupied apartment complex but there is little evidence of the other locations mentioned in earlier press releases being used. Largely Marine training has been restricted to Camp Atterbury and the Raytheon facility on the city’s east side, leaving the Marines biggest public exposure to be at the Indiana State Fairgrounds during a community outreach day.

It is critically important for all readers to understand that it is the military veterans of this nation who are sounding the alarm as rogue elements within our government have decided to Cross the Rubicon misusing the relationship between the public and U. S. Armed Forces to desensitize military and law enforcement personnel and encourage them to accept what was once considered unacceptable. “We’re all part of the national defense mechanism in some way,” Ballard said. “The impact on the city will be very minimal. . . . They just have to trust us that we’re doing the right thing for the city and the nation.”

The ultimate mission of the Marine Corps is to protect and defend The Constitution, not to practice waging war against America.