Denver, City Park West, 8:00 pm – According to a Denver Police spokesperson, the invasion of black helicopters with uniformed men hanging off of them, experienced by this neighborhood this evening, is a practice run of Navy Seals and SWAT teams, landing at the Civic Center, Childrens Hospital, and City Park, in preparation for the Democratic National Convention. Hmmmm…. 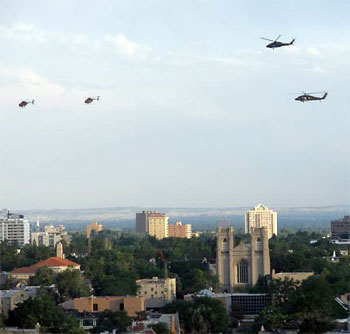 The Rocky Mountain News, after an unflattering article on the Black Hawks – yes, tinfoil hatters, black helicopters – invading Denver, came back with a clarification. It’s all part of the GWOT, or Global War on Terrorism, in response to the reservations of mayor John Hickenlooper. “The federal agencies sponsoring the ongoing multi-agency training in Denver agreed to make the proper notifications regarding the exercises to prevent surprise and inconvenience to Denver residents,” Hickenlooper said. “There seems to have been a misunderstanding about the reach and scope of these notifications, and they did not occur in the manner expected by the City.”

Mr. Hickenlooper, the feds don’t need no stinkin’ notifications. Mr. Hickenlooper also declares the “exercises” have nothing to do with the DNC. It’s all a coincidence, Mr. Mayor – sure, and I’m expecting a visit by the tooth fairy tonight, that is after Santa makes an early appearance and brings me a Lamborghini.

As Erin Rosa reports for the Colorado Independent, the original “angle” on the “exercises” “quickly disappeared,” replaced by the official version of events. “Either way, countless numbers of residents called the police department and the city’s 311 line last night wondering why their neighborhoods sounded like a war zone.”

Um, because they live in a police state?

The exercise by special ops troops, supported by Denver police SWAT teams and firefighters, is intended to prepare for any terrorism threat in a “realistic urban environment,” said Lt. Steve Ruh, a spokesman for the U.S. Special Operations Command, headquartered at MacDill Air Force Base in Florida. …

“It’s all in preparation for anything that could possibly happen with the global war on terrorism,” said Ruh, whose command coordinates all the military branches’ crack commando units – from Army Rangers to Navy SEALS.

The Special Operations Command calls itself the “Tip of the Spear” against the nation’s gravest threats.

Ruh noted that the exercises are conducted in major cities in the U.S., usually at the invitation of the cities, but that doesn’t mean those cities are necessarily possible targets for terrorism.

Oh, no, of course not, but Denver will be “targeted” by Americans, exercising their constitutional right to petition the government, who are upset with the way things are going.

It wasn’t just black helicopters, though.

From ABC News 7 in Denver:

There was also activity on the streets of Denver as well. On Tuesday, a special team from the Department of Defense rumbled through downtown, with big sport utility vehicles carrying sophisticated communication equipment that belong to the Weapons of Mass Destruction Civil Support Team, or CST.

The CST team, based in Wyoming, is designed to respond immediately to any act of terrorism. Team members would not comment on their mission.

“Is this a normal occurrence here or is there something funky going on that we should be wondering what we ought to be doing next?” said witness Bill Whitaker.

U.S. military Special Operations commandos will continue conducting the counter-terrorism training from early afternoon until 11 p.m. through Friday night, according to the Rocky Mountain News.

None of the agencies involved informed the public or news agencies about the drill and that may have had an effect on Denver’s 911 system.

No, you think? Imagine if you had no idea the government was conducting this “exercise” and one of these Black Hawk Down birds swooped over your house, rattling the windows and upsetting your children and pets. You might think it’s a scene out of Red Dawn. Your confusion, fear, and anger, of course, would be a small price to pay in the GWOT. Never know when Osama might crawl out from under your bed.

The Alliance for Real Democracy is made up of 12 groups, many led by activists in their early 20s and 30s.

Organizers said Tuesday their nonviolent events will urge an end to the war in Iraq and raise awareness of “the global climate crisis.”

The alliance is open to people of all ages, but will especially target young people. It also plans to invite convention delegates to the events.

“This is as much a part of the process as going to a very formal convention,” said Jojo Pease, an organizer with Students for a Democratic Society.

Some of the groups were previously affiliated with the Re-Create 68 Alliance, but split off after a disagreement over tactics.

Re-Create 68 has promised demonstrations that will rival those at the notorious Democratic convention in Chicago held in 1968, which was accompanied by street battles between police and anti-Vietnam War demonstrators.

Members of the Alliance for Real Democracy wouldn’t talk Tuesday about Re-Create 68 or the split.

But they released bylaws that say the group “will not use or return violence – verbal or physical – toward any person or other creature,” and will not damage property, bring weapons to protests or use illegal drugs or alcohol during events.

It will be Re-Create 68’s “tactics” – confronting the cops, verbally and physically – that will give the GWOT boys an excuse to crack-down on activists from the Alliance for Real Democracy. If you’d like more background on Re-Create 68, see the video above.