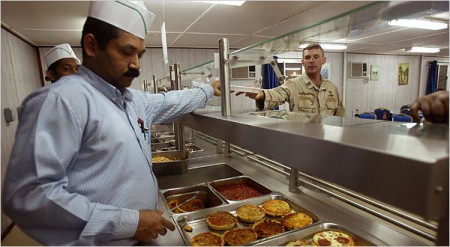 An employee of KBR serving dinner to an American soldier at a base in Baghdad. In 2004, a civilian official questioned KBR’s request for about $200 million in payments for food services.

WASHINGTON – The Army official who managed the Pentagon’s largest contract in Iraq says he was ousted from his job when he refused to approve paying more than $1 billion in questionable charges to KBR, the Houston-based company that has provided food, housing and other services to American troops.

The official, Charles M. Smith, was the senior civilian overseeing the multibillion-dollar contract with KBR during the first two years of the war. Speaking out for the first time, Mr. Smith said that he was forced from his job in 2004 after informing KBR officials that the Army would impose escalating financial penalties if they failed to improve their chaotic Iraqi operations.

Army auditors had determined that KBR lacked credible data or records for more than $1 billion in spending, so Mr. Smith refused to sign off on the payments to the company. “They had a gigantic amount of costs they couldn’t justify,” he said in an interview. “Ultimately, the money that was going to KBR was money being taken away from the troops, and I wasn’t going to do that.”

But he was suddenly replaced, he said, and his successors – after taking the unusual step of hiring an outside contractor to consider KBR’s claims – approved most of the payments he had tried to block.

Army officials denied that Mr. Smith had been removed because of the dispute, but confirmed that they had reversed his decision, arguing that blocking the payments to KBR would have eroded basic services to troops. They said that KBR had warned that if it was not paid, it would reduce payments to subcontractors, which in turn would cut back on services.

“You have to understand the circumstances at the time,” said Jeffrey P. Parsons, executive director of the Army Contracting Command. “We could not let operational support suffer because of some other things.”

Mr. Smith’s account fills in important gaps about the Pentagon’s handling of the KBR contract, which has cost more than $20 billion so far and has come under fierce criticism from lawmakers.

While it was previously reported that the Army had held up large payments to the company and then switched course, Mr. Smith has provided a glimpse of what happened inside the Army during the biggest showdown between the government and KBR. He is giving his account just as the Pentagon has recently awarded KBR part of a 10-year, $150 billion contract in Iraq.

Heather Browne, a spokeswoman for KBR, said in a statement that the company “conducts its operations in a manner that is compliant with the terms of the contract.” She added that it had not engaged in any improper behavior.

Ever since KBR emerged as the dominant contractor in Iraq, critics have questioned whether the company has benefited from its political connections to the Bush administration. Until last year, KBR was known as Kellogg, Brown and Root and was a subsidiary of Halliburton, the Texas oil services giant, where Vice President Dick Cheney previously served as chief executive.

When told of Mr. Smith’s account, Representative Henry A. Waxman, the California Democrat who is chairman of the House Oversight and Government Reform Committee, said it “is startling, and it confirms the committee’s worst fears. KBR has repeatedly gouged the taxpayer, and the Bush administration has looked the other way every time.”

Mr. Smith, a civilian employee of the Army for 31 years, spent his entire career at the Rock Island Arsenal, the Army’s headquarters for much of its contracting work, near Davenport, Iowa. He said he had waited to speak out until after he retired in February.

As chief of the Field Support Contracting Division of the Army Field Support Command, he was in charge of the KBR contract from the start. Mr. Smith soon came to believe that KBR’s business operations in Iraq were a mess. By the end of 2003, the Defense Contract Audit Agency told him that about $1 billion in cost estimates were not credible and should not be used as the basis for Army payments to the contractor.

Along with the auditors, he said, he pushed for months to get KBR to provide data to justify the spending, including approximately $200 million for food services. Mr. Smith soon felt under pressure to ease up on KBR, he said. He and his boss, Maj. Gen. Wade H. McManus Jr., then the commander of the Army Field Support Command, were called to Pentagon meetings with Tina Ballard, then the deputy assistant secretary of the Army for policy and procurement.

Eventually, Mr. Smith began warning KBR that he would withhold payments and performance bonuses until the company provided the Army with adequate data to justify the expenses. The bonuses – worth up to 2 percent of the value of the work – had to be approved by special boards of Army officials, and Mr. Smith made it clear that he would not set up the boards without the information.

Mr. Smith also told KBR that, until the information was received, he would withhold 15 percent of all payments on its future work in Iraq.

“KBR really did not like that, and they told me they were going to fight it,” Mr. Smith recalled.

In August 2004, he told one of his deputies, Mary Beth Watkins, to hand deliver a letter about the threatened penalties to a KBR official visiting Rock Island. That official, whose name Mr. Smith said he could not recall, responded by saying, “This is going to get turned around,” Mr. Smith said.

Two officials familiar with the episode confirmed that account, but would speak only on the condition of anonymity out of concern for their jobs.

The next morning, Mr. Smith said he got a call from Brig. Gen. Jerome Johnson, who succeeded General McManus when he retired the month before. “He told me, “You’ve got to pull back that letter,”‘ Mr. Smith recalled. General Johnson declined to comment for this article.

A day later, Mr. Smith discovered that he had been replaced when he went to a meeting with KBR officials and found a colleague there in his place. Mr. Smith was moved into a job planning for future contracts with Iraq. Ms. Watkins, who also declined to comment, was reassigned as well.

Mr. Parsons, the contracting director, confirmed the personnel changes. But he denied that pressure from KBR was a factor in the Army’s decision making about the payments. “This issue was not decided overnight, and had been discussed all the way up to the office of the secretary of defense,” he said.

Lt. Col. Brian Maka, a Pentagon spokesman, disputed that. He said in a statement that the Army auditing agency “does not believe that RCI was used to circumvent” the Army audits.

Paul Heagen, a spokesman for RCI’s parent company, the Serco Group, said his firm had insisted on working with the Army auditors. While KBR did not provide all of the data Mr. Smith had been seeking, Mr. Heagen said his company had used “best practices” and sound methodology to determine KBR’s costs.

Bob Bauman, a former Pentagon fraud investigator and contracting expert, said that was unusual. “I have never seen a contractor given that position, of estimating costs and scrubbing D.C.A.A.’s numbers,” he said. “I believe they are treading on dangerous ground.”

High grades on its work in Iraq also allowed KBR to win more work from the Pentagon, and this spring, KBR was awarded a share in the new 10-year contract. The Army also announced that Serco, RCI’s parent, will help oversee the Army’s new contract with KBR.