A month after US army reservist Matthis Chiroux publicly refused to deploy to Iraq, the former sergeant on Sunday set himself up for possible prosecution by failing to report for active duty with his unit in South Carolina. 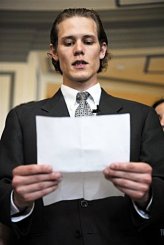 “Tonight at midnight, I may face further action from the army for refusing to reactivate to participate in the Iraq occupation,” Chiroux told reporters in Washington.

“I stand here today in defense of those who have been stripped of their voices in this occupation, the warriors of this nation…”, Chiroux read from a statement as his father Rob, who had travelled to Washington from Alabama to support his son on Father’s Day, stood beside him.

Last month, Chiroux rejected an order calling him back to active duty in Iraq, saying he considers the war “illegal and unconstitutional.”

Chiroux served five years in the army, with tours in Afghanistan, Japan, Germany and the Philippines.

He was honorably discharged last year and was placed in the Individual Ready Reserves (IRR), a pool of former soldiers who can be “reactivated” in a national emergency or war.

Prior to the Iraq war, IRR members were rarely recalled to active duty, according to the Military Times, an independent newspaper for members of the US armed forces and their families.

“Many believed they never would be called — but when the army found itself stretched by unexpected combat demands in Iraq in the summer of 2004 it began issuing mobilization orders,” Military Times wrote in an article published a year ago on Sunday.

According to the paper, hundreds of IRR members “refused to report or simply ignored their mailed mobilization orders.”

Matthis’ father Rob, a rocket scientist who lives in the army town of Huntsville, Alabama, said mobilizing IRR members was a form of back-door draft.

“If our country is in such a dire emergency that we need to conscript manpower, congress has to vote to reinstate the draft,” the elder Chiroux told AFP.

“But they won’t do that because if congress said we need to bring back the general draft, the war in Iraq would be resolved very quickly,” he said.

“Moms and dads, who represent millions and millions of voters, would say: wait a minute — you want to draft my kid? Iraq’s got to stop.”