There’s rain on the grill and snow in the passes

There’s further proof that this spring has been uncomfortably and depressingly cold — the coldest in memory, the coldest since 1917. 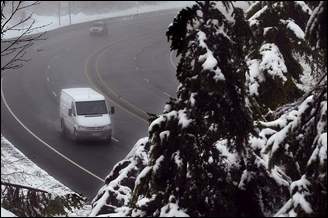 Validation came Tuesday from the University of Washington, where Cliff Mass, an atmospheric sciences professor, published his new “barbecue index.” 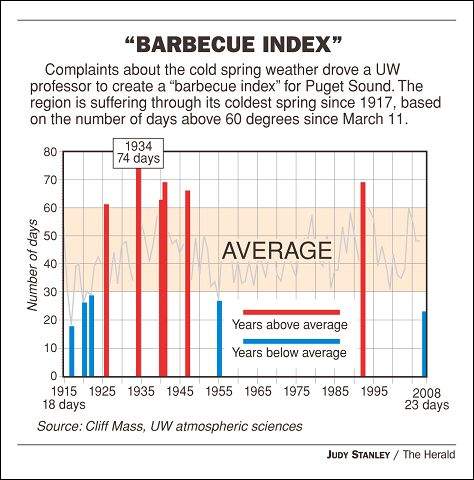 “I’ve gotten a lot of calls about how unusual this weather’s been,” said Mass. “In roughly 90 years, this is the most ­unpleasant year for being outside and having a barbecue.”

Mass and meteorologist Mark Albright found proof of the pain after reviewing warm spring days since 1894. They tallied the number of spring days above 60 degrees.

“Sixty degrees is a very important temperature,” Mass said. “Most people are fairly comfortable being outside.”

He found that most years have about 42 days of warm weather between March 11 and June 10.

This year, there have been only 23 days with temperatures above 60 degrees.

Not since spring 1917 — when there were only 18 days of warm weather — has there been so many chilly spring days, Mass said.

The first nine days of June are supposed to average about 68 degrees, but this year temps averaged 57 degrees, measured in downtown Seattle. That’s the coldest ever since records started in 1891.

Five Western Washington sites including the Seattle-Tacoma International Airport and Bellingham all broke records for having daily high temperatures that are very low.

“Our high temperatures this month are closer to our average low than our average high,” meteorologist Dennis D’Amico said.

It’s not just the cold weather that seems weird. Winds whipped up Monday, briefly knocking out power to 20,000 customers in north Snohomish County.

A few inches of snowfall in the mountain passes Monday and Tuesday made international TV news, and drew calls to local meteorologists from media outlets in Vancouver, B.C., and Los Angeles.

The snow fell at low elevations, bringing out state highway snowplows in June for the first time in 30 years. The winter-that-never-ended broke the state snowplow budget by at least $9.1 million, and crews were forced to plow when they are usually mowing grass.

Forecasters predict a cooler than normal summer without any sign of how wet or dry it might be, D’Amico said.

Weather is expected to get nicer through the rest of the week, with temperatures warming up into the mid-60s and with the possibility of a dry weekend. On Monday, it might drizzle but temperatures are forecast to stay in the 60s, meteorologists said.

Mass confesses even he’s ready for a change. He planted vegetable seeds in April: zucchini, green beans and peas.

“They rotted in the ground,” he said. “A lot of my flowering plants were delayed. My tomato plants are not going anywhere, but they’re still alive. My friend who is a beekeeper said the bees are suffering, and the amount of honey laid into the frames is way below expectations.”

Although, according to the calendar, summer starts June 21, the whole month tends to be overcast and gloomy. Summer doesn’t really start around here until July 11, Mass said.

Until then, it’s still wool socks and sandals season. Remember, wool helps to wick away the water — even the tears that fall because you can’t barbecue.