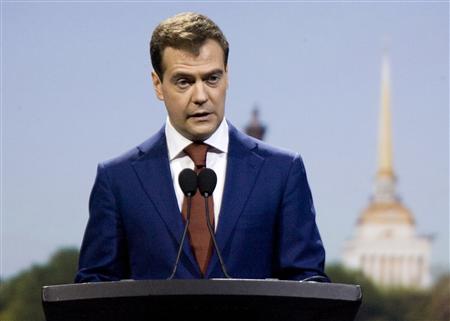 “Failure by the biggest financial firms in the world to adequately take risk into account, coupled with the aggressive financial policies of the biggest economy in the world, have led not only to corporate losses,” Medvedev told Russia’s main annual event for international investors in St Petersburg.

“Most people on the planet have become poorer.”

The Kremlin leader said investment by cash-rich Russian companies abroad, promotion of Moscow as a major financial centre and use of the ruble as a reserve currency were part of the answer.

These could help solve problems created by what he said was a gap between the United States’ leading global economic role and “its true capabilities.”

The Kremlin leader said economic nationalism had played a big part in triggering the current crisis, which he compared to the Great Depression of the 1930s.

The Kremlin leader also attacked big bonuses paid out in the financial world, saying regulators needed to ensure that incentives promoted “rational behavior based on a balanced evaluation of risks and rewards.”

U.S. Secretary of Commerce Carlos Gutierrez, who spoke shortly after Medvedev, appeared to reject the criticism.

He said the United States had never based its policies on “economic egoism” and believed in free trade.

“Globalization is in the national interest,” he added.

Medvedev said Russia, now in the 10th year of an economic boom fuelled by soaring prices for its oil and gas exports, was in an ideal position to help solve the world financial crisis since it did not share the problems of other leading economies.

“Russia is now a global player and understands its role in

“I propose holding a representative international conference involving the heads of the biggest financial companies and leading financial analysts…as early as this year,” the Kremlin chief said. “Such a platform could become a permanent one.”

The Kremlin has encouraged Russian companies, which are flush with cash from high commodity and oil prices, to invest more actively abroad but this has caused alarm in Western nations, which are traditionally suspicious of Moscow’s intentions.

Medvedev said other countries had nothing to fear from Russian investment in their companies since it was “neither speculative nor aggressive” but purely based on pragmatism.

Sworn in last month as president, the Russian leader said world institutions had been unable so far to cope with the challenges from volatility on world markets, including soaring commodity and food prices.

With its past as a leading global wheat producer, Russia was ready for “constructive joint action” to overcome the food problem, he said.

Moscow could also help with another problem — a lack of liquid investable assets because of disappointment with the U.S. dollar. Russia would soon adopt a plan to become a global financial centre and make the ruble a regional reserve currency, Medvedev said.

The Russian leader said that recent Kremlin moves to liberalize the domestic gas market and reduce taxes on the oil sector would help stabilize global energy markets. Russia is the world’s biggest gas producer and its second-biggest oil exporter.