Iranian President Mahmoud Ahmadinejad predicted on Monday that Muslims would uproot “satanic powers” and repeated his controversial belief that Israel will soon disappear, the Mehr news agency reported.“I must announce that the Zionist regime (Israel), with a 60-year record of genocide, plunder, invasion and betrayal is about to die and will soon be erased from the geographical scene,” he said.

“Today, the time for the fall of the satanic power of the United States has come and the countdown to the annihilation of the emperor of power and wealth has started.” 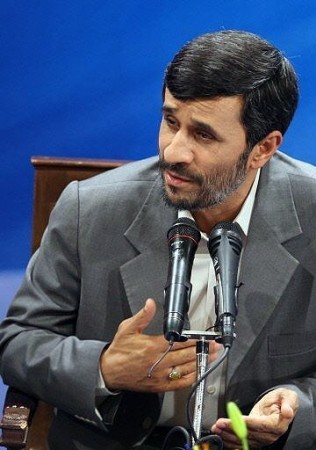 Since taking the presidency in August 2005, Ahmadinejad has repeatedly provoked international outrage by predicting Israel is doomed to disappear.

“I tell you that with the unity and awareness of all the Islamic countries all the satanic powers will soon be destroyed,” he said to a group of foreign visitors ahead of the 19th anniversary of the death of revolutionary leader Ayatollah Ruhollah Khomeini.

Ahmadinejad also again expressed his apocalyptic vision that tyranny in the world be abolished by the return to earth of the Mahdi, the 12th imam of Shiite Islam, alongside great religious figures including Jesus Christ.

“With the appearance of the promised saviour… and his companions such as Jesus Christ, tyranny will be soon be eradicated in the world.”

Ahmadinejad has always been a devotee of the Mahdi, who Shiites believe disappeared more than a thousand years ago and who will return one day to usher in a new era of peace and harmony.

His emphasis on the Mahdi has been a cause of controversy inside Iran with critics saying he would be better solving bread-and-butter domestic problems rather than talking about Iran’s divine responsibility.