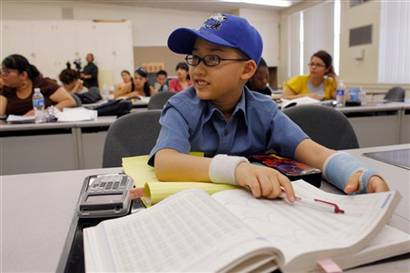 “Finals are coming and everything and he cannot play with both hands. He’ll just try to play with the right hand,” he says. “I don’t know how his grade’s going to be in piano. It worries me a bit.”

If past success is any indication, his son will find a way to compensate. Cavalin, who enrolled in college more than a year ago, has maintained an A-plus average in such subjects as algebra, history, astronomy and physical education.

The youngest?
College officials couldn’t immediately say whether he is the youngest student in the school’s 63-year history. Among child prodigies, Michael Kearney, now 24, is often cited as the world’s youngest college graduate, having earned a bachelor’s degree in anthropology from the University of South Alabama at age 10.

Cavalin’s professors can’t recall having a younger student in their classes.

“He is the youngest college student I’ve ever taught and one of the hardest working,” says Daniel Judge, his statistics professor. “He’s actually a pleasure to have in class. He’s a well-adjusted, nice little boy.”

Cavalin was an 8-year-old freshman when he enrolled in Guajao Liao’s intermediate algebra class in 2006. By the end of the term, Liao recalls, he was tutoring some of his 19- and 20-year-old classmates.

“I told his parents that his ability was much higher than that level, that he should take a higher-level course,” Liao says. “But his parents didn’t want to push him.”

Avoid calling him a genius
Cavalin’s parents avoid calling their son a genius. They say he’s just an average kid who enjoys studying as much as he likes playing soccer, watching Jackie Chan movies, and collecting toy cars and baseball caps with tiger emblems on them. He was born during the Year of the Tiger in the Chinese zodiac.

Cavalin has a general idea what his IQ is, but doesn’t like to discuss it. He says other students can achieve his success if they study hard and stay focused on their work.

His parents say they never planned to enroll their son in college at age 8, and sought to put him in a private elementary school when he was 6.

“They didn’t want to accept me because I knew more than the teacher there and they said I looked too bored,” the youngster recalls.

His parents home-schooled him instead, but after two years decided college was the best place for him. East L.A. officials agreed to accept him if he enrolled initially in just two classes, math and physical education. After he earned A-pluses in both, he was allowed to expand his studies.

“He sees things very simply,” says Judge, his statistics teacher. “Most students think that things should be harder than they are and they put these mental blocks in front of them and they make things harder than they should be. In the case of Moshe, he sees right through the complications. … It’s not really mystical in any way, but at the same time it’s amazing.”