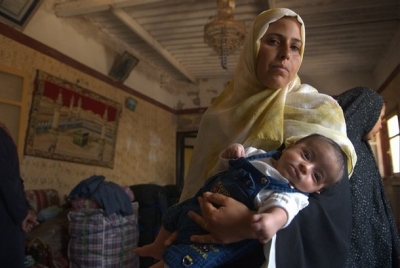 The Israeli siege of Gaza that has restricted access to food, water, and medicine is beginning to cause serious problems for newborn babies and pregnant mothers. “Many babies are born suffering from anemia that they have inherited from their mothers,” said Dr. Salah al-Rantisi, head of the women’s health department at the Palestinian ministry of health in Gaza. The mothers are becoming anemic because they do not get enough nutrition during pregnancy due to the Israeli blockade that has choked the supply of food and medicines.

Dr. al-Rantisi also heads the women’s health unit at Nasser hospital, where 30 to 40 children are born every day. Many suffer from anemia, he said.

Anwaar Abu Daqqa, 30, has lost three babies prematurely. The fetuses were malformed as a result of lack of nutrition and medicine for the mother, Dr. al-Rantisi said. In the last case, Daqqa got to the hospital late because she could not find transport. “Premature babies born dangerously underweight are a daily and increasing phenomenon in Gaza’s hospitals,” he said.

The Gaza Strip is poorer and harder hit than the West Bank; but there, too, there are well-documented instances of women having to give birth at checkpoints because of restrictions on movement.

“There are many cases of pregnant women who need medicines that are not available in Gaza,” al-Rantisi said. Most families could not afford them even if they were available, he said.

The World Bank said last month that the poverty rate in Gaza is now close to 67 percent, and that economic growth last year was zero.

One consequence of poverty is anemia. The condition, a direct consequence of poor nutrition, is not new to Gaza. The United Nations Relief and Works Agency reported in 2002 that 19 percent of Gazans suffered from anemia at that point. The figure is estimated by the agency now to be 77.5 percent. Children receive on average only 61 percent of their daily need of calories from U.N. supplies.

Many of the newly born have been hit by the political situation before they could open their eyes to the world. Of the many deliveries that take place at al-Shifa hospital, the largest in Gaza, no one can tell how many of these children will be able to live happy, healthy lives. Their first dangers are lack of food, water, and medicines; the fear of bombing comes later.

Tahani Safi, 29, is worried about her caesarean section, scheduled for tomorrow. She suffers from malnutrition, high blood pressure, diabetes, and insufficient protective water around the child in the womb. Such cases can be found at any hospital, but doctors say that the number of cases resulting from poor food and medical care in Gaza is rising. Health authorities have warned that the life and health of countless babies is in serious danger all across Gaza. So far, 146 Gazans have died directly as a result of the Israeli siege and the border closures and shortage of medication and health care has brought, the ministry of health says.