“Reduced biodiversity means millions of people face a future where food supplies are more vulnerable to pests and disease and where water is in irregular or short supply.”
James Leape, Director general, WWF UK

Between a quarter and a third of the world’s wildlife has been lost since 1970, according to data compiled by the Zoological Society of London. 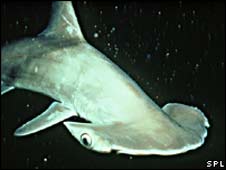 Humans are wiping out about 1% of all other species every year, and one of the “great extinction episodes” in the Earth’s history is under way, it says.

Pollution, farming and urban expansion, over-fishing and hunting are blamed.

The Living Planet Index, compiled by the society in partnership with the wildlife group WWF, tracks the fortunes of more than 1,400 species of fish, amphibians, reptiles, birds and mammals, using scientific publications and online databases.

Populations of ocean birds have fallen by 30% since the mid 1990s, while land-based populations have dropped by 25%.

Among the creatures most seriously affected have been African antelopes, swordfish and hammerhead sharks.

Another, the baiji – or Yangtze River Dolphin – may have been lost altogether.

The findings were released ahead of a meeting of the Convention on Biodiversity in the German city of Bonn.

The convention was signed in 1992 with the aim of stabilising the loss of species. In 2002, member states pledged to achieve a “significant reduction” in the current rate of biodiversity loss by 2010.

But the Zoological Society said governments had since failed to put in place policies necessary to achieve that goal.

It said that while species’ decline does appear to have flattened off in recent years, it is “very unlikely” that the 2010 target will be reached.

The WWF said that over the next 30 years, climate change was also expected to become a significant threat to species. 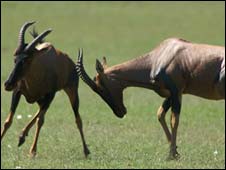 Land-based species, such as African antelopes, have fallen by 25%

Colin Butfield, head of campaigns at WWF UK, said: “Biodiversity underpins the health of the planet and has a direct impact on all our lives, so it is alarming that despite an increased awareness of environmental issues we continue to see a downward trend.”

The charity also warned that a failure to stop biodiversity loss would have a direct impact on humans.

Director general James Leape said: “Reduced biodiversity means millions of people face a future where food supplies are more vulnerable to pests and disease and where water is in irregular or short supply.

“No-one can escape the impact of biodiversity loss because reduced global diversity translates quite clearly into fewer new medicines, greater vulnerability to natural disasters and greater effects from global warming.”

The WWF is calling on governments meeting in Bonn to honour their commitments to put in place effective protected areas for wildlife and to adopt a target to achieve net annual zero deforestation by 2020.

The UK’s Biodiversity Minister, Joan Ruddock, said the report showed that the international community had to work together to stem the decline.

“The fact that human activities have caused more rapid changes in biodiversity in the last 50 years than at any other time in human history should concern us all,” she said.

“Supporting wildlife is critical to all our futures and the UK will continue to give strong support to international action.

“Schemes such as the Darwin Initiative have used UK expertise to help more that 490 wildlife conservation, regeneration and research projects in 146 countries.”

Lifestyles and the consumption of resources vary widely from country to country. On average each person needs 2.2 global hectares to support the demands they place on the environment, but the planet is only able to meet consumption levels of 1.8 global hectares per person.