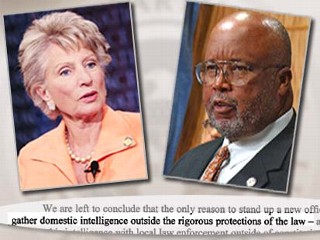 The Department of Homeland Security wants to set up a new program to illegally spy on Americans, two senior Democratic lawmakers charged Thursday in a letter urging colleagues to deny funds for the program.

In a letter to three colleagues obtained by ABC News, House Homeland Security Chairman Bennie Thompson, Miss., and Rep. Jane Harman, Calif., voiced objections to a new office DHS wants to create that would share the detailed surveillance capabilities of military intelligence satellites and other monitoring technology with state and local law enforcement.

The size of the National Applications Office, as DHS has named it, and its proposed budget, remain classified. The department has said the office would not traffic in eavesdropped conversations. It would primarily be used to share data from military assets for disaster response, monitoring climate change and other purposes, according to DHS.

Noting that the Pentagon is already cleared and capable of sharing satellite imagery on a legal and limited basis to aid authorities protecting major events or responding to natural disasters, Thompson and Harman said the purpose of expanding the program and placing it in a classified office could only be to surveil U.S. residents illegally.

“We are left to conclude that the only reason to stand up a new office would be to gather domestic intelligence outside the rigorous protections of the law — and, ultimately, to share this intelligence with local law enforcement outside of constitutional parameters,” Thompson and Harman wrote.

The two urged their colleagues to bar funding for the program, which they said would likely violate long-standing laws prohibiting military involvement in peacetime law enforcement. Current law bars money for the program until Congress’ auditors review and approve a legal argument from DHS justifying the office, which is expected later this year.

The letter contained some of the harshest language yet from the lawmakers, who have raised serious questions about the proposed office since the administration announced its plans for NAO late last year.

DHS Secretary Michael Chertoff has called their concerns baseless and has pushed to institute the program. “I think we’ve fully addressed anybody’s concerns,” Chertoff reportedly said in a recent chat with bloggers. “I think the way is now clear to stand it up and go warm on it.”

But if the House appropriators who control DHS’ pursestrings listen to Thompson and Harman, that may not be the case. “Having been burned before on the Terrorist Surveillance Program and knowing this administration’s disdain for obeying the laws Congress passes, we need to be extraordinarily careful,” Thompson and Harman warned in their letter today.

“We are confident that [congressional auditors] will soon conclude — like the DHS Inspector General — that the NAO is a lawful and effective tool for protecting the country,” said department spokeswoman Laura Keehner. She said the lawmakers fundamentally misunderstood the office, were “wrong on the law” and charged that their efforts “are misguided, and plainly political.”