LAND ‘O LAKES, Fla. — A substitute teacher in Pasco County has lost his job after being accused of wizardry.

Teacher Jim Piculas does a magic trick where a toothpick disappears and then reappears. 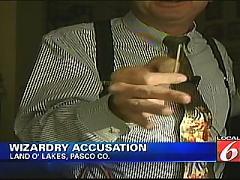 Piculas recently did the 30-second trick in front of a classroom at Rushe Middle School in Land ‘O Lakes.Piculas said he then got a call from the supervisor of teachers, saying he’d been accused of wizardry.”I get a call the middle of the day from head of supervisor of substitute teachers. He says, ‘Jim, we have a huge issue, you can’t take any more assignments you need to come in right away,'” he said.Piculas said he did not know of any other accusations that would have led to the action.The teacher said he is concerned that the incident may prevent him from getting future jobs.Watch Local 6 News for more on this story.

(Since Harry Potter everybody knows that it is not allowed to perform magic in front of muggles. The Ministry of Magic has probably deported him to Askaban already. It cannot be allowed that our children are taught by somebody who has only the smallest of abilities. We need normal teachers with no ability at all who are just “re-puking” what they have learned at university. – The Infinite Unknown)