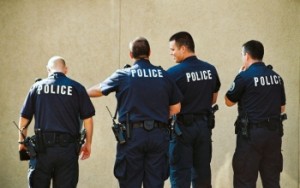 An Infowars reader called in to the Alex Jones show yesterday to alert us to the story and explain that he had gleaned the information from a his friend, a sheriff’s deputy in Memphis, who had described the operation as “training for martial law in America”.

Forget innocent until proven guilty, you are now a terrorist suspect until you are told otherwise.

It is now the norm to consider everybody equally likely to be guilty of something than innocent. This is proactive policing, not preventative or reactive policing, and is widely indicative of a society that is NOT free.

This form of proactive policing is a phenomena indicative of a once free state rapidly declining into a authoritarian police state.

If there was a real terror threat in these states, it would surely make sense to for law enforcement agencies to target known trouble areas, and follow up on already existing leads. Instead we are seeing local police and the coast guard being recruited to randomly target anyone in any area as possible terrorists.

Surely if there was a real terror threat, this activity would harm the effort to combat it.

Of course, such activity is clearly not related to a real and tangible terror threat, it is related to the ongoing effort to vastly increase the size and scope of the federal government and increase the power it has over American citizens.

The information and intelligence from the operation will be collated and routed through federally funded state-run fusion centers, which are working in conjunction with the military arm of the DHS, NORTHCOM.

Such information will soon include the DNA and other biometric information from every person arrested, which DHS head Michael Chertoff has declared is no longer your personal information.

We recently reported on the fact that after 9/11 the Justice Department advised the Bush administration that it was able to effectively suspend the Fourth Amendment where domestic counter terrorism operations are concerned.

In light of this, and given that the government has begun to class any crime as terrorism and set local and state police to work on “anti-terror” operations, it is clear that the protections provided by the Bill of Rights and the Constitution are under direct threat.

We have seen how new provisions will effectively nullify the U.S. constitution, and a recent spate of executive orders, in particular PDD 51, outline preparations for the implementation of open martial law in the event of a declared national emergency.

Centralized and federally coordinated law enforcement programs complement nationwide FEMA programs to train Pastors and other religious representatives to become secret police enforcers who teach their congregations to “obey the government” in preparation for the implementation of martial law, property and firearm seizures, mass vaccination programs and forced relocation. The effects of this particular program have already been witnessed.