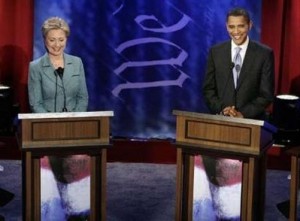 But the former first lady said “we’ve got to begin diplomatic engagement with Iran” at a lower level of officialdom than Obama’s preference for top-level contacts.

“And we want the region and the world to understand how serious we are about it,” she said. “The President George W.Bush policy has failed. Iran has not been deterred.”

Obama earlier pledged to Jewish voters here that he would do his utmost to help Israel fend off any regional threat, as he criticized ex-president Jimmy Carter for seeking to meet with Hamas leaders.

At the debate, he said: “An (Iranian) attack on Israel is an attack on our strongest ally in the region, one whose security we consider paramount.

“That would be an act of aggression that I would consider unacceptable and the United States would take appropriate action.”

“And we will let the Iranians know that, yes, an attack on Israel would trigger massive retaliation,” she said.

“But so would an attack on those countries that are willing to go under the(US) security umbrella and forswear their own nuclear ambitions.”

Polls show Clinton has stalled Obama’s attempt to catch her in Pennsylvania, but her lead of around six points did not suggest the kind of blowout win she needs to sow doubts about Obama’s viability in the minds of top party leaders.