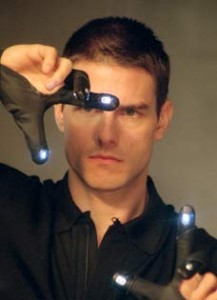 But that same year, scientists at the University of Sussex in England adapted the same technology they had been using to detect heart rates at distances of up to 1 meter, or a little more than three feet, to remotely detect changes in the brain. And while scientific limitations to remote EEG detection still exist, clearly the question is when, not if, these issues will be resolved.

Meanwhile, another remote brain-activity detector, which uses light beamed through the skull to measure changes in oxygen levels in the brain, may be on the way. Together with the EEG, it would enhance the power of brain scanning. Today the technology consists of a headband sensor worn by the subject, a control box to capture the data and a computer to analyze it. With the help of government funding, however, that is all becoming increasingly compact and portable, paving the way for more specific remote detection of brain activity.

But don’t panic: The government can’t read our minds — yet. So far, these tools simply measure changes in the brain; they don’t detect thoughts and intentions.

Scientists, though, are hard at work trying to decode how those signals relate to mental states such as perception and intention. Different EEG frequencies, for example, have been associated with fear, anger, joy and sorrow and different cognitive states such as a person’s level of alertness. So when you’re stopped for speeding and terrified because you’re carrying illegal drugs in the trunk of your car, EEG technology might enable the police to detect your fear or increased alertness. This is not so far-fetched: Some scientists already are able to tell from brain images in the lab whether a test subject was envisioning a tool such as a hammer or a screwdriver or a dwelling, and to predict whether the subject intended to add or subtract numbers. Just last month, scientists announced a new study aimed at decoding visual imagery in the brain.

Although brain-based lie-detection technology has been quite controversial and has only been tested on a limited basis, early researchers have claimed high accuracy at detecting deception. But there’s a problem: Most brain-based lie-detection tests assume that lying should result in more brain activity than truth-telling because lying involves more cognition. So these lie-detection methods may fail in sociopaths or in individuals who believe in the falsehood they’re telling.

Whether such technology will be effective outside the laboratory remains to be seen, but the very fact that the government is banking on its future potential raises myriad questions.

Imagine, for example, a police officer approaching a suspect based on Perceptrak’s “unusual activity” detection. Equipped with remote neural-detection technology, the officer asks her a few questions, and the detection device deems her responses to be deceptive. Will this be enough evidence for an arrest? Can it be used to convict a person of intent to commit a crime? Significant scientific hurdles remain before neurotechnology can be used that way, but given how fast it’s developing, I think we must pause now to ask how it may affect the fundamental precepts of our criminal justice system.

Americans have been willing to tolerate significant new security measures and greater encroachments on civil liberties after the terrorist attacks of Sept. 11, 2001. Could reports of significant crime reduction such as that seen by Johns Hopkins, or incidents such as the student shootings last year at Virginia Tech or more recently at Northern Illinois University, be enough to justify the use of pre-crime technology? Could remote neural monitoring together with intelligent video analytics have prevented those tragedies? And if they could, should they be allowed to?

These are just some of the questions we must ask as we balance scientific advances and the promise of enhanced safety against a loss of liberty. And we must do it now, while our voices still matter. In a world where private thoughts are no longer private, what will our protections be?

Nita Farahany, an assistant professor of law and philosophy at Vanderbilt University, is the editor of the forthcoming “Genes and Justice: The Impact of Behavioral Genetics and Neuroscience on Criminal Law.”