A bomb exploded in New York City’s Times Square early this morning, damaging a military recruiting center. Police are now on the hunt for a man seen on a bike wearing a grey hoodie. While authorities remain on full alert, they insist that there is no imminent threat after the 4 a.m. explosion. 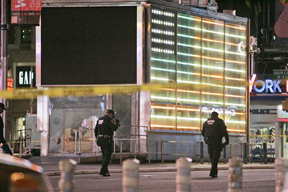 The blast from the explosion was, according to eyewitnesses, pretty powerful. Witnesses said that the bomb shook the ground that they stood on, and those in nearby hotels also felt the vibrations from the blast. Police said that the bomb shattered a glass building entrance, but that no one was seriously injured.

According to media reports, there are several surveillance cameras located where the explosion took place, so it is likely that a video of the bomb’s explosion will be released in the near future. For the time being, however, police are likely to be using it to help identify the perpetrator of the attack.