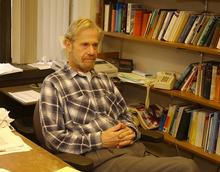 Conversely, if even one experimenter in the universe can make decisions that are not fully determined by the past, then every particle in the universe must be indeterminate as well, the theorem states.

Conway and Kochen said they believe that people have free will and thus they accept that the universe does have inherent indeterminacy. But they point out that others can suggest a determinate universe, as long as they also reject at least one of the three assumptions, or free will itself.

“Therefore, if you really take free will seriously, the universe is full of it,” Conway said.

The most controversial aspect of the new theorem is likely to be the use of the term “free will” to describe a particular choice an experimenter can make. To many, the term belongs more to philosophy than to physics.

“If you bring up free will [in this context] in certain societies, people will say, ‘Oh, you’re a nut’ straight away,” Conway said. “Many will prefer a more mealymouthed term, like ‘indeterminacy.’ ”

If Conway’s and Kochen’s research proves valid, it may permanently alter the study of quantum mechanics, Anderson said.

Quantum mechanics is a physical theory, born near the beginning of the 20th century, that describes the behavior of fundamental particles in an inherently probabilistic way. Quantum mechanics predicts only the odds of obtaining a certain value for a measurement of a particle’s momentum, speed, position or other physical property. But it often cannot predict what value will be observed in a specific instance.

Since the theory was formulated, some scientists have sought to restore determinacy to their models by proposing that other, unknown pieces of information, called “hidden variables,” might contain the data necessary to predict outcomes with certainty.

If the Free Will Theorem is correct, then any theory that accepts the three relevant assumptions and admits the free will of experimenters must also allow for at least some uncertainty in the behavior of fundamental particles.

“I think it’s a positive development,” said Anderson. “I always thought the study of hidden variables should go, anyhow.”

Kochen spent many years searching for resolutions to the indeterminacy inherent in quantum mechanics, but said he abandoned those efforts after he became convinced of the validity of his recent work.

“I would hope that people who are working in hidden variables look at what they are doing and say, ‘Is this reasonable?’ ” Kochen said.

The strength of the Free Will Theorem comes from its general assumptions, the authors claim. It does not refer specifically to quantum mechanics, as did many previous attempts to resolve determinacy issues.

Instead, the proof of the theorem depends entirely on three assumptions about nature itself.

The first two assumptions are essentially restatements of certain phenomena discovered through quantum mechanics, but that can be verified without knowing that theory.

Next, the third assumption is that no information can instantaneously cause a physical change at a distance. A similar assumption underlies both special and general relativity.

Given these three assumptions, the theorem concludes that if an experimenter is able to make decisions about what he will measure independent of past events, then the results cannot be predetermined either.

Essentially, free will of the experimenter requires “free will” of the particles on which he experiments, the theorem states.

While the rigorous proof and the use of the term “free will” are new to this theorem, Conway and Kochen said the phenomena that underlie the first two assumptions have been well documented. Both rely on a property of quantum particles called spin.

The first assumption is a reformulation of an idea hatched by Kochen and Ernst Specker in 1965. They posited that while measuring quantum spin in two or three directions sequentially could be problematic, measuring the square of the spin could avoid many complications.

The second property is a particular example of a phenomenon known as quantum entanglement, first proposed by Einstein, Podolsky and Rosen in 1935. The “EPR paradox” stated that it was possible for two particles to have behavior that was inexorably linked, despite distances between them.

While several physicists saw a mathematical elegance to the new proof, they did not believe it would fundamentally alter their view of the world.

“As a physicist, I never had the slightest doubt quantum mechanics is correct,” said Freeman Dyson, professor emeritus at the Institute for Advanced Study.

Conway and Kochen have talked about issues surrounding the foundations and limitations of quantum mechanics for at least 10 years, but the pair only began to work on this latest theorem in earnest in the last six months.

The professors presented the new theorem at a public lecture on Friday.

They have not yet decided when or where they will publish their results.