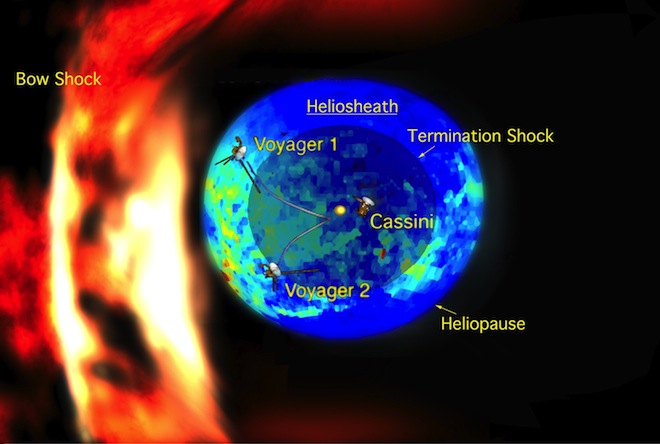 A model of the solar system’s edge using recent data. Voyager 1′s latest findings will likely rewrite this image, as soon as scientists figure out exactly what they mean. NASA/JPL/JHUAPL

Not content with simply being the man-made object to travel farthest from Earth, NASA’s Voyager 1 spacecraft recently entered a bizarre new region at the solar system’s edge that has physicists baffled. Their theories don’t predict anything like it.

Launched 36 years ago, Voyager 1 and its twin Voyager 2 made an unprecedented tour of the outer planets, returning spectacular data from their journey. The first Voyager sped out of the solar system in 1980 and it has since been edging closer and closer to interstellar space. The probe is currently out more than 120 times the distance between the Earth and the sun.

Scientists initially thought that Voyager’s transition into this new realm, where effects from the rest of the galaxy become more pronounced, would be gradual and unexciting. But it’s proven to be far more complicated than anything researchers had imagined, with the spacecraft now encountering a strange region that scientists are struggling to make sense of.

“The models that have been thought to predict what should happen are all incorrect,” said physicist Stamatios Krimigis of the Johns Hopkins University Applied Physics Laboratory, who is lead author of one of three new papers on Voyager appearing in Science on June 27. “We essentially have absolutely no reliable roadmap of what to expect at this point.”