– “It’s Not only Carillion that’s Built on Sand, it’s our Whole System of Corporate Accountability”:

The construction & services giant collapsed even as KPMG signed off on its financial statements; now they deny any responsibility.

The Big Four accountancy firms — PricewaterhouseCoopers, Ernst & Young, KPMG, and Deloitte — reported combined annual revenues of $134 billion in 2017. In the global audit arena, they are virtually unassailable. In the US, the Big Four audit 497 of the S&P 500 companies. In the UK, they audit 99 of the FTSE 100 companies. In Spain there’s not a single firm listed on the IBEX 35 whose accounts are not audited by one of the Big Four.

But what are the Big Four firms actually good for?

Read more“It’s Not only Carillion that’s Built on Sand, it’s our Whole System of Corporate Accountability”

– Carillion: Behind the Headlines:

With the recent bombshell news that Carillion was going into voluntary liquidation there are growing fears that other firms such as G4S could also be at risk. News has also surfaced that KPMG is under increasing pressure and risks being investigated for giving Carillion’s financial statements its seal of approval only 10 months ago.

CCH Daily recently reported that, in respect of Carillion, “the official receiver will make an application to the High Court for PricewaterhouseCoopers (PwC) to be appointed as special managers, to act on behalf of the official receiver, and we further anticipate that an order will be granted to that effect.”

It has also emerged that the government had awarded “contracts worth £2bn to the firm even after it had issued profit warnings.” When challenged on this issue a senior government minister replied that “contracts awarded after the profit warnings were only won as part of joint ventures (JVs) where the other JV partners would guarantee the provision of services.”

“My own experience with “The Big Four” was along the same lines.
They audited the books with small random samples as against checking the full monty as it used to be done.
Sadly the Accountancy charters are as much to blame for lowering the standards in favour of speeding things up for the big boys.
A classic case of pressure from above.
They all deserve what they get….except the poor minion.” 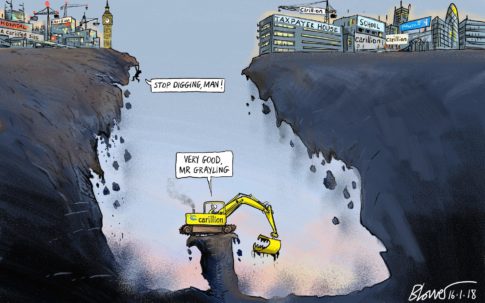 – Carillion collapse leaves 30,000 businesses losing out on up to £1bn:

Crisis-hit construction giant Carillion has plunged into liquidation, owing up to 30,000 businesses around £1bn in unpaid costs, and putting thousands of jobs and pensions at risk.

Carillion has around 20,000 UK employees and is a major supplier to the Government, building infrastructure including the HS2 project and maintaining schools and prisons.

Read moreCarillion collapse leaves 30,000 businesses losing out on up to £1 BILLION