The German broadcaster @ntvde interviewed a doctor working in the hospital in Duma:"There were no patients with symptoms of a chemical gas attack!" pic.twitter.com/wctxv50Gl6

– Trust between Russia and US nearly lost, but not zero – Lavrov to BBC

Rand Paul: I have yet to see evidence that Assad was responsible for the chemical attack in Syria. The only thing that would galvanize the world to attack Assad directly is a chemical attack. So what logic would there be for Assad, who’s winning the war, to use chemical weapons? pic.twitter.com/1NFF2duoAy

– Saudi Arabia Would Send Troops To Syria As Part Of “Islamic Coalition”:

The Trump administration is hoping to secure a commitment from a handful of Middle Eastern states to assemble what is effectively an Arab army for a permanent military “stabilizing force” in Syria.

Russian military claims it has found a rebel chemical weapons warehouse in #Douma, #Syria with pre-cursors and chlorine but as yet, like the US, UK and France, provides no evidence. https://t.co/89lPR4Lpgf

– What the Hell is This? Syrian Chemical Weapons Lab Bombed. Check Out the Board of Directors.

Residents of #Syria’s Douma tell American journalist @PearsonSharp that they love President Bashar al-Assad and that the chemical weapons attack was staged by the desperate “rebels” to get the Western powers to strike the Syrian Army. #SyriaStrikes pic.twitter.com/MQjENZBLZa

"All the strikes were depending on is social media and hearsay" says @UKLabour's @DerbyChrisW after @theresa_may's grilled by MPs for bypassing @UKParliament over strikes. pic.twitter.com/GieXsKSxCW

– Optimism of Manufacturers “Plunged” the Most Ever: NY Fed

China Slaps 179% Tariff On US Sorghum Hours After US Bans Exports To China's ZTE https://t.co/cQJ3ASIq2h 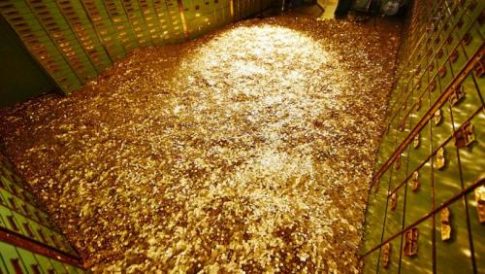 The writing is on the wall and major financial institutions across the world are warning about the economic disaster to come. Unabated money printing, tariff trade wars, rising interest rates and retail slowdowns point to one result, and it’s going to be brutal.

Big banks and governments know what’s coming and they are preparing for this eventuality by stockpiling huge amounts of “real money” ahead of the crisis.

– Starbucks To Close Over 8,000 Locations For Sensitivity Training After Arrest Of Two Black Men

– Bitcoin Tumbles After Mystery “Whale” Dumps $50 Million In One Trade

Germany- The "Amazonization" of consumption – 46 percent of all German online sales go through Amazon.https://t.co/gx5eCCqP96 pic.twitter.com/W3sxDUMWc6

– “I Want To Set The Record Straight”: Hannity Expains His Relationship With Michael Cohen