– Watch: Former Head Of British Armed Forces In Iraq Tells Truth About Syria, Is Cut Off By Sky News:

“…the debate that seems to be missing from all this – and this was mentioned by the [Russian] ambassador – is what possible motive might Syria have to launch a chemical attack at this time and in this place… The Syrians are winning,”

Is it any wonder that US-Russia relations are, reportedly, as their lowest in decades?…

“An incident will occur and somebody will get blamed and it’s usually a false flag,” said Paul.

“Right now, recently, it’s all been in Syria, ‘Assad did it! Assad did it!’” explained the former congressman. “No proof at all.”

– Sky News cuts off top British general after he asks ‘Why would Syria launch a gas attack now?’

“I hope he realizes very profoundly as I did, and as other presidents have done… that any nuclear exchange could involve catastrophe for all human beings.“

– A Second US Tomahawk-Capable Destroyer Enters The Mediterranean

Can you believe that the Afghan war is our “longest war” ever—bring our troops home, rebuild the U.S., make America great again.

“Among the rare earth metals that Russia supplies to the United States is titanium, which is necessary for the technological cycle of production of Boeing…”

90% have not been paying attention…

– 10% Of US Facebook Users Deleted Their Accounts Over Data-Privacy Scandal, Survey Shows 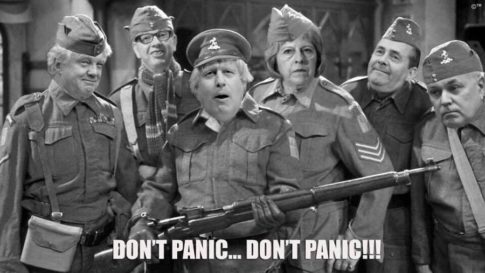 Enoch Powell “Rivers of Blood”: The Speech Everyone Needs to Hear