I’ve inserted the wrong link before (Sorry about that.):

Personally, I do not think much of Baba Vanga.

He amazingly also predicted Putin’s rise to power to the month.

The year 1999, seventh month,
From the sky will come a great King of Terror,
To resuscitate the great king of “Angolmois”
Before, after, Mars to reign happily.

In the year 1999, in the seventh month,
from the sky there comes a great king of terror,
to bring back the great king of the Mongols,
Mars rules triumphantly, before and after”

Here “Angolmois” is an anagram of the French “Mongoulois” = Mongols.

There are more verses, which are (most probably) also related to Putin.

Putin, like Clinton, Bush, Obama, Trump, ‘Treason’ May, Cameron, Blair, Kohl, Schröder, Merkel, Sarkozy, Hollande, Macron and Xi Jinping, is a Freemason and an Illuminati puppet, like Stalin, Hitler, Churchhill and Rooosevelt were before.

History is repeating itself.

And if Putin will be the one in charge during WW3 (another verse), then he is the one that Nostradamus called the greatest bloodhound.

Part of that verse can also be seen as an anagram (anagram’s are frequently used by Nostradamus) and then the Russian leader in charge during WW3 would be in Moscow (of course) and would be greater (& worse) than Stalin (during WW3) and if it is Putin, then he will betray the Russians, like Freemason & Illuminati puppet Adolf Hitler has betrayed the Germans. 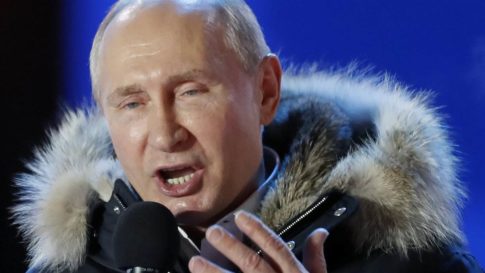 MOSCOW (AP) — Vladimir Putin rolled to a crushing re-election victory Sunday for six more years as Russia’s president, and he told cheering supporters in a triumphant but brief speech that “we are bound for success.”

With ballots from 80 percent of Russia’s precincts counted by early Monday, Putin had amassed 76 percent of the vote. Observers and individual voters reported widespread violations including ballot-box stuffing and forced voting, but the claims are unlikely to dilute the power of Russia’s longest-serving leader since Josef Stalin.

As the embodiment of Russia’s resurgent power on the world stage, Putin commands immense loyalty among Russians. More than 30,000 crowded into Manezh Square adjacent to the Kremlin in temperatures of minus 10 (15 Fahrenheit) for a victory concert and to await his words.Putin extolled them for their support — “I am a member of your team” — and he promised them that “we are bound for success.” Then he left the stage after speaking for less than two minutes, a seemingly perfunctory appearance that encapsulated the election’s predictability.

Since he took the helm in Russia on New Year’s Eve 1999 after Boris Yeltsin’s surprise resignation, Putin’s electoral power has centered on stability, a quality cherished by Russians after the chaotic breakup of the Soviet Union and the “wild capitalism” of the Yeltsin years.

But that stability has been bolstered by a suppression of dissent, the withering of independent media and the top-down control of politics called “managed democracy.” There were widespread reports of forced voting Sunday, efforts to make Russia appear to be a robust democracy.

Among them were two election observers in Gorny Shchit, a rural district of Yekaterinburg, who told The Associated Press they saw an unusually high influx of people going to the polls between noon and 2 p.m. A doctor at a hospital in the Ural mountains city told the AP that 2 p.m. was the deadline for health officials to report to their superiors that they had voted.

“People were coming in all at once, (they) were entering in groups as if a tram has arrived at a stop,” said one of the observers, Sergei Krivonogov . The voters were taking pictures of the pocket calendars or leaflets that poll workers distributed, seemingly as proof of voting, he said.

Election officials moved quickly to respond to some of the violations. They suspended the chief of a polling station near Moscow where a ballot-stuffing incident was reported and sealed the ballot box. A man accused of tossing multiple ballots into a box in the far eastern town of Artyom was arrested.

Overall national turnout was expected to be a little more than 60 percent, which would be several points below turnout in Putin’s electoral wins in 2000, 2004 and 2012. He did not run in 2008 because of term limits, but was appointed prime minister, a role in which he was widely seen as leader.

Putin’s most vehement foe, anti-corruption campaigner Alexei Navalny, was barred from running Sunday because he was convicted of fraud in a case widely regarded as politically motivated. Navalny and his supporters had called for an election boycott but the extent of its success could not immediately be gauged.

The election came amid escalating tensions with the West, with reports that Moscow was behind the nerve-agent poisoning this month of a former Russian double agent in Britain and that its internet trolls had waged an extensive campaign to undermine the 2016 U.S. presidential election. Britain and Russia last week announced expulsions of diplomats over the spy case and the U.S. issued new sanctions.

In his first public comments on the poisoning, Putin on Sunday referred to the allegations against Russia as “nonsense.” Moscow has denounced both cases as efforts to interfere in the Russian election. But the disputes likely worked in Putin’s favor, reinforcing the official stance that the West is infected with “Russophobia” and determined to undermine both Putin and traditional Russian values.

The election took place on the fourth anniversary of the 2014 annexation of Crimea from Ukraine, one of the most dramatic manifestations of Putin’s drive to reassert Russia’s power. Crimea and Russia’s subsequent support of separatists in eastern Ukraine led to an array of U.S. and European sanctions that, along with falling oil prices, damaged the Russian economy and slashed the ruble’s value by half. But Putin’s popularity remained strong, apparently buttressed by nationalist pride.

In his next six years, Putin is likely to assert Russia’s power abroad even more strongly. Just weeks ago, he announced that Russia has developed advanced nuclear weapons capable of evading missile defenses. The Russian military campaign that bolsters the Syrian government is clearly aimed at strengthening Moscow’s foothold in the Middle East, and Russia eagerly eyes any reconciliation on the Korean Peninsula as an economic opportunity.

At home, Putin must face how to groom a successor or devise a strategy to circumvent term limits, how to diversify an economy still dependent on oil and gas, and how to improve medical care and social services in regions far removed from the cosmopolitan glitter of Moscow.

Authorities struggled against voter apathy, putting many of Russia’s nearly 111 million voters under intense pressure to cast ballots. Yevgeny, a 43-year-old mechanic voting in central Moscow, said he briefly wondered whether it was worth voting.

“But the answer was easy … if I want to keep working, I vote,” he said, speaking on condition that his last name not be used out of fear his employer — the Moscow city government — would find out. First-time voters in Moscow were given free tickets for pop concerts and health authorities were offering free cancer screenings.

Voters appeared to be turning in out in larger numbers Sunday than in the last presidential election in 2012, when Putin faced a serious opposition movement and there were instances of multiple voting, ballot stuffing and coercion.

Navalny, whose group also monitored the vote, dismissed Putin’s challengers on Sunday’s ballot as “puppets.” He urged a boycott of the vote and vowed to continue defying the Kremlin with street protests.

Ukraine, insulted by the decision to hold the election on the anniversary of Crimea’s annexation, refused to let ordinary Russians vote. Ukraine security forces blocked the Russian Embassy in Kiev and consulates elsewhere as the government protested the voting in Crimea, whose annexation is still not internationally recognized.

Ukrainian leaders are also angry over Russian support for separatists in eastern Ukraine, where fighting has killed at least 10,000 people since 2014. Polls show that most Russians view the takeover of the Black Sea peninsula as a major achievement despite subsequent Western sanctions.

“Who am I voting for? Who else?” said Putin supporter Andrei Borisov, 70, a retired engineer in Moscow. “The others, it’s a circus.” The Central Election Commission also claimed it had been the target of a hacking attempt from 15 unidentified nations that was deterred by authorities.

This story has been corrected to show that Yekaterinburg’s mayor spoke on his video blog, not to The Associated Press.