– Mnuchin’s Most Bizarre Claim Yet: “There Is No Link Between Rising Wages And Inflation”:

Treasury Secretary Steven Mnuchin has a degree from one of the most prestigious universities in the world (Harvard grads may dispute this); He was the CIO of Goldman Sachs; He launched a successful hedge fund; He is now Treasury Secretary. Yet he appears to barely grasp basic economic concepts (not to mention his apparent fondness for fake math).

Last night, Mnuchin transparently tried to sooth markets by telling a crowd of reporters who accompanied him to the US Mint in Philadelphia that investors shouldn’t worry about rising inflation and Treasury yields – even with the 10-year yield so close to crossing into the “danger zone” above 3%.

Quoted by Bloomberg, Mnuchin swatted away the suggestion that investors are worried about rising prices, even as the average hourly wage number for January soared the most since 2009, triggering this month’s “volocaust”.  Why? Because in Mnuchin’s mind, wage inflation and rising consumer prices have only a tenuous link – if that.

“There are a lot of ways to have the economy grow,” Mnuchin said in an interview aboard a train to Philadelphia on Thursday, where he toured the U.S. Mint. “You can have wage inflation and not necessarily have inflation concerns in general.”

If that’s true – it’s certainly news to us. And judging by the tone of these dismayed Jeffrey Gundlach tweets, we’re not alone.

Mnuchin: policies will raise wages w/out inflation. Yeah, sure. And we are going to expand the Buffalo Art Museum without making it bigger.

Mnuchin added that he isn’t concerned about foreign investment in new US debt, which analysts expect could exceed $1.2 trillion this year (with all the latest bells and whistles) as the Trump tax cuts force the federal government to issue more debt, saturating the market and probably driving yields higher.

Of course, Mnuchin has fallen in line behind his boss and repeatedly asserted that the US would make up for lost tax revenue by boosting economic growth to 3% over the coming decade, something that would result in one of the longest and most powerful economic expansions in modern history. 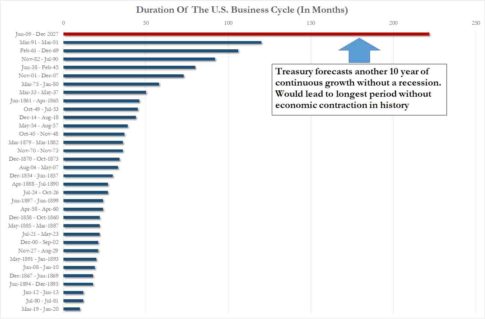 Instead, the suggestion that the Trump tax cuts would boost government revenues through growth has been widely debunked.

As Trump’s chief economic cheerleader, Mnuchin has consistently deflected any suggestion that the president’s policies could have a downside. He sidestepped the idea that tax cuts and increased federal spending Trump has signed into law amount to an economic stimulus.

“Is it very good for the economy? Absolutely,” Mnuchin said of the tax cuts. “One of the reasons why the president won the election is because most middle-class Americans had very little wage growth.”

Turning to the problem of rising crude oil prices, Mnuchin asserted that higher energy costs wouldn’t drive up the price of goods because the US is producing more of its own oil thanks to the shale boom, and is relying less on exports which… wait, what? That makes absolutely no sense: Higher oil prices are higher oil prices, period, and will impact the cost of goods from every conceivable angle, raising the cost of production and distribution, not to mention gas.

But perhaps even more concerning than his comments about inflation were his remarks about the $20 trillion pile of federal government debt, which is about to swell further. Foreigners held $6.3 trillion of that by the end of last year, something that leaders of the US intelligence community have referred to as a security threat.

Much of the new U.S. debt will be bought by foreign investors. Foreign holdings of U.S. Treasuries stood at $6.3 trillion as of the end of last year, hovering near a record amount and almost double the level when the recession ended in 2009. China alone holds about a fifth of foreign-held debt, making it the U.S.’s largest creditor.

The director of national intelligence, Dan Coats, told the Senate Intelligence Committee on Feb. 13 that the U.S. debt, now at $20.8 trillion, is “unsustainable” and “represents a dire threat to our economic and national security.”

“I would urge all of us to recognize the need to address this challenge and to take action as soon as possible before a fiscal crisis occurs that truly undermines our ability to ensure our national security,” Coats said.

But Mnuchin said that foreign investors in U.S. debt don’t worry him.

“I’m not concerned about that for national security risks,” he said, adding that what’s important is that the U.S. can afford to finance its military and intelligence operations.

Already, both energy and higher wages are having a discernible impact on prices: Consumer prices in January were 2.1% higher than a year earlier, up from 1.6% in June. With unemployment at an all-time low, tightness in the labor market SHOULD lead to rising wages and, by extension, higher consumer prices (this is a basic economic concept called the Phillips curve) – though often during her final year in office the former Fed Chairwoman Janet Yellen would suggest that this relationship has unraveled to a degree during the post-crisis period.

But many investors believe this dynamic is back in play: Persuading them otherwise will be one of Mnuchin’s more burdensome responsibilities during the coming months.