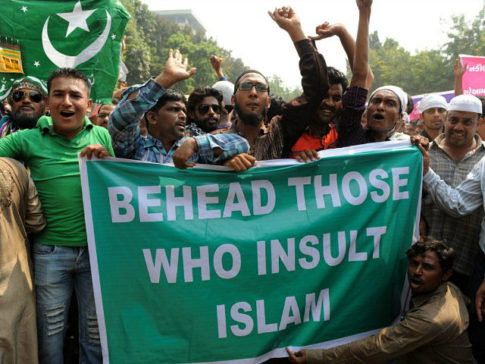 A mob of an estimated 3,000 Islamic extremists in Pakistan reportedly called for the beheading of a 17-year-old Christian whose phone, after reappearing days after he lost it, contained blasphemous content that authorities could use to sentence him to life in prison or death.

The case is the latest in a series of incidents each year involving a member of a religious minority group accused engaging in the act of insulting or showing contempt or lack of reverence for Islam in the Muslim-majority country.

Initially, “hundreds” of local Muslims from the Dhair a village in Lahore’s Shahdara town, where Patras lives, accused the Christian boy of blasphemy on Monday, but the group of Islamic extremists calling for authorities to punish the teenager grew to 3,000.

Local police lost control of the situation as the numbers gathered in the mob grew beyond 3000. Slogans and chants shouted by the the mob began to increase in volume and pressed for the young man to be beheaded even though at that point no charges had been laid. One man held up a sign saying, “Wicked Christian Patras should be punished for committing blasphemy!”

Authorities revealed that the Muslim mob was gathering gasoline to set Christian homes ablaze in the area, prompting the members of the religious minority group to flee the region.

“Forced to leave their properties behind, the frightened families sought temporary shelter elsewhere and reports of looting of vacated properties have been received,” BPCA notes, adding, “Roadblocks were secured by police as part of a wider cordon to prevent people entering into Shahdara town as police set about trying to calm the situation.”

It all started when a local Muslim man, identified as Muhammad Awais, demanded that all willing law enforcement agents in the region file blasphemy charges against the young teenager.

India Today describes the accuser, Awais, as a local cleric, noting that he accused Patras of “sharing blasphemous content on social media … Content shared on Patras Masih’s Facebook account seem to have hurt the religious sentiments of the people in Lahore’s Shahdara.”

After filing charges, “police initiated an investigation and began a search for Patras Masih, who could not be found at his property” at the time, BPCA points out.

However, the brave Christian teenager reportedly surrendered himself to local authorities to restore peace and prevent the extremists from attacking other Christians and setting their homes on fire.

[N]ews of the blasphemous images posted on Patras Masih’s FB page stirred up great anger amongst local Muslims and hundreds gathered outside Patras Masih’s home … on 19 February 2018. The demonstrators called for Patras to be lynched and threats were being made that Christian homes would be burnt down if Patras Masih was not given up to the authorities or the mob for retribution against his blasphemy.

In Pakistan, the anti-blasphemy section of the country’s penal code recommends either life in prison or death for anyone convicted of insulting to God, Islam, or religious leaders.

According to various analysts, including the Voice of America (VOA) news outlet, court cases involving the controversial law seldom result in a fair trial, often leading to a harsh verdict of life in prison or death.

Although Pakistan has yet to execute anyone convicted of blasphemy, many sentenced blasphemers remain on death row and hundreds await trial, according to Human Rights Watch (HRW).

This story illustrates the daily danger faced by Pak-Christians and the speed at which a lynch mob can precipitate even prior to charges being laid. Even the normal event of losing one’s mobile is cause for great fear among vulnerable minorities. It is hard to imagine how anyone could use the opportunity of a lost phone to do this to another human being – but this is Pakistan and crimes like this are all too common.

The situation may yet get worse especially due to the growing number of incensed Muslims baying for the blood of Christians as they seek revenge for the presumed insult to their faith. At the moment all Christians in the area are under imminent threat of violence and many report they are hiding in their homes.

An estimated 100 people, including Christian children, are reportedly detained on blasphemy charges every year.