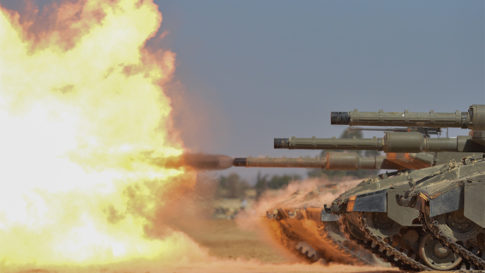 In response to the attack, IDF just struck a military observation post near the place of the attack.

Four IDF soldiers were wounded in the attack, two severely. Evacuated and treated, families have been notified. Stay tuned.

In response, the IDF used a tank to target a “military observation post near the place of the attack.” The shots were reportedly fired at a Hamas facility located east of the city of Khan Yunis, according to Israeli media.

Later on Saturday, the Israeli Air Force also targeted six Hamas targets located in the Gaza Strip, in what was called further retaliation for the detonation of an explosive device that hit an IDF patrol. The targets included a tunnel built by the Hamas militants, as well as several “military facilities” of the armed group, the Israeli media reported.

Earlier today, an IED detonated near IDF troops on the security fence near the S Gaza Strip. In response, IAF fighter jets targeted 6 military targets in Gaza belonging to Hamas, including: a terror tunnel in the Zaytun area & military compounds near Deir ElBalah & Khan Yunis

The IDF also blamed the incident on Hamas and accused the group of staging “fake” demonstrations to cover their operations, which involved planting improvised explosive devices (IEDs). “The IED that wounded [four] IDF soldiers was placed under the cover of yesterday’s riot, attached to a flag,” Conricus said, adding that the IDF holds “Hamas responsible for all aggression from Gaza.”

The incident came amid increased tensions between Israelis and Palestinians, who are supported by Hamas. Protests gripped Palestinian territories after US President Donald Trump’s official recognition of Jerusalem as the capital of Israel.

On February 10, more than 50 Palestinian protesters were injured by Israeli forces, which used live ammunition to suppress the 10th ‘Friday of Rage’ rally. The latest major clash between the Israeli military and the Palestinian armed groups occurred in November when the IDF used tanks and jets to attack Hamas positions following the mortar shelling of an Israeli outpost by another militant group.

In October, the IDF also blew up a tunnel built by militants, which stretched from the Gaza Strip into Israel’s territory. The Palestinian groups then vowed retaliation for the move, which claimed the lives of six militants.