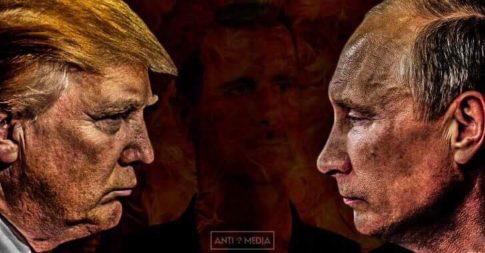 – The World Is on the Brink of War Once Again as All Hell Breaks Loose in Syria:

According to the coalition’s statement, the strikes were carried out after forces allied with the Syrian government “initiated an unprovoked attack” against what CNN termed “a well-established Syrian Democratic Forces headquarters where coalition advisers were working with US-backed Syrian fighters.”

CNN dubbed the U.S.-led strike “defensive” even though U.S. forces have no legal authority to be in Syria in the first place, something the New York Times was forced to admit a few weeks ago. According to official numbers, there are some 2,000 U.S. troops embedded with SDF forces in Syria, and Syria has deemed these U.S. troops to be an invading force. Technically, the act of violating Syria’s sovereignty and killing over 100 of its troops in a flagrant act of war makes the U.S. the aggressor — not the defender — in this scenario. (If you are having trouble understanding this, try reversing the U.S. and Syria in the scenario and seeing how you would feel if the shoe were on the other foot).

According to the Marine Corps Times, the coalition service members were acting in an “advise, assist and accompany capacity” when the attack occurred, eight kilometers east of the current Euphrates River deconfliction line. However, U.S. troops in Syria have been doing a lot more than advising and assisting on the ground. According to Army Sgt. Major. John Wayne Troxell, one particular Marine battalion “fired more rounds in five months in Raqqa, Syria, than any other Marine artillery battalion, or any Marine or Army battalion, since the Vietnam war.”

The Marine Corps Times called it an “explosive revelation” that shed light on the “immense level of lethal force brought to Raqqa and northern Syria,” noting that in comparison, only 34,000 artillery rounds had been fired in the invasion of Iraq.

Moving back to the matter at hand, CNN reported that the attack on the U.S. base in Syria involved some 500 pro-Assad forces using artillery, mortar fire, and Russian-made tanks. According to the military official CNN quoted, no U.S. or SDF forces were killed in the attack, but the coalition still saw it fit to retaliate by killing at least 100 Syrian government forces. It is indisputably and particularly hypocritical that there is no international outrage over this act of aggression when one compares the media hysteria over a country like North Korea, which is currently bombing no one.

The official also stated that the coalition suspected the pro-government forces attacked because they have their sights set on seizing the lucrative oil fields in the area, which the SDF had previously taken after ISIS’ control over the area collapsed.

Despite the fact that this territory belongs to Syria, the U.S. is providing air cover for the SDF to take hold of this oil-rich region. The SDF doesn’t have an air force of its own, but if it can start generating substantial revenue from these oil fields, then it may be able to start buying more and more military equipment from the U.S.

The other option, of course, is that the U.S. can provide air cover for the SDF in the region indefinitely, something that could pose a problem in the distant future if the U.S. military presence has no determined end in sight. As it stands, the U.S. is proposing it stay in Syria until a political resolution sees the Assad government unseated.

The official also explained that Russia had been informed of the presence of pro-regime forces in the area before the attack and that Russia assured the coalition they would not engage with coalition forces. Russia responded to the attack almost immediately, condemning the U.S. military presence in Syria as “illegal” and accusing the U.S. of trying to steal Syrian oil.

“The recent incident once again shows that the United States’ illegal military presence in Syria is actually aimed at taking control of the country’s economic assets and not at fighting against the ISIS international terror group,” the Russian Defense Ministry said in a statement, as quoted by the Washington Post.

It should also be noted that these incidents of aggression do nothing to aid Russia’s current and ongoing attempt to establish a peace process of its own.

At around the same time, Turkish media reported that Turkey’s Prime Minister and its Foreign Minister had been in contact with both Iran and Russia. This is remarkable because these communications have preceded a scheduled visit to Turkey this weekend by U.S. national security advisor H.R. McMaster. Iran and Russia were also reportedly in contact with each other at around the same time, as well. Could it be that this triangle of emerging power brokers in Syria deciding the fate of Syria without the involvement of the U.S. has prompted the American military to take drastic measures to disrupt this developing alliance? Even with opposing aims in Syria — and even with Turkey’s recent invasion of Syrian territory — Iran, Turkey, and Russia have all managed to find some common ground without resorting to a confrontation with one another.

Accusing the U.S. of “mission-creep,” former U.S. ambassador to Syria Robert Ford said “[t]he Americans have managed through their diplomatic strategy to isolate themselves to the point where Turkey, Iran and Syria all agree that what the U.S. is doing in Syria is bad.”

Further, before the American-led air attack took place, Russia accused the U.S. of attempting to partition Syria, an accusation that appears to be grounded in reality. CNN has acknowledged that the U.S. did not strike pro-regime forces that crossed back to their assigned territory of the Euphrates River even though all of the territory technically belongs to the government under international law. In other words, the U.S. is happy to leave Syrian troops to their own devices provided they stay within the areas the U.S. has assigned to them. How else could this be described, if not a partition?

Further, according to the International Crisis Group (ICG), an international NGO whose mission is to prevent and resolve deadly conflict, Iran and Israel are only one “miscalculation” away from war as both sides have been seen to escalate their military interventions in Syria. The ICG identified Russia as the only real mediator between the two countries and urged Russia to play a more active role in averting a potential escalation.

Further, also on Wednesday, the BBC reported that Israeli warplanes had attacked a military complex in Damascus. A Syrian military statement reportedly said its air defense systems had blocked most of the missiles, but it is not clear if there were any significant casualties. Meanwhile, Israeli Prime Minister Benjamin Netanyahu also reportedly visited the disputed Golan Heights territory at the same time, warning his enemies not to test Israel’s resolve. This was a clear reference to Iran and Hezbollah, which is prominent in both Lebanon and Syria.

In what can be described as an amazing coincidence, these air attacks by both Israel and the U.S. have taken place off the back of a joint military exercise between the United States and Israel, which simulated a joint U.S.-Israeli response to a rocket attack by Hezbollah.

Were these recent attacks by Israel and the U.S. a one-time incident in response to the threats allegedly posed by pro-Assad forces, including Hezbollah? Or are both these countries building up to something more confrontational?

All things considered, it seems likely we will find out where this conflict is headed in the not too distant future, especially given the potential for one miscalculated move to lead to something extremely volatile. As it stands, it should be noted that in the meantime, it is not Syria that is attacking any other state or launching a war against any other country.

With the assistance of the media, the U.S. and Israel continue to bomb Syrian territory in direct contravention of international law, now killing and wounding significant numbers of the Syrian government’s armed forces without any significant journalistic or international opposition.

One can only hope that someone heeds the advice of the ICG and attempts to de-escalate this conflict before it transforms itself into a regional powder keg involving at least three or more nuclear powers.

“Positioning the pieces on the board and preparing the lies.

“In what can be described as an amazing coincidence, these air attacks by both Israel and the U.S. have taken place off the back of a joint military exercise between the United States and Israel, which simulated a joint U.S.-Israeli response to a rocket attack by Hezbollah.

Were these recent attacks by Israel and the U.S. a one-time incident in response to the threats allegedly posed by pro-Assad forces, including Hezbollah? Or are both these countries building up to something more confrontational?”

The TPTB have WW3 planned for us…