A Chinese warship moored on the Yangtze River appears to be undergoing a somewhat unique upgrade at a shipyard in Hubei, which may indicate the People’s Liberation Army has become the first military in the world to mount an electromagnetic hypersonic railgun onto a ship. 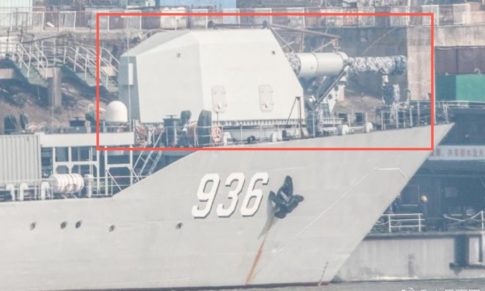 On January 31st, ship observers from China leaked surveillance photographs of what appears to be an electromagnetic hypersonic railgun at Wuchang Shipyard. The images show the People’s Liberation Army Navy (PLAN or Chinese Navy) Type 072 III landing ship called the Haiyang shan (hull number 936) with its standard twin 37-millimeter cannons removed, and what is suspected, a railgun in its place with support containers situated midship.

Is #China‘s #PLAN About to Test a #Railgun at Sea ? https://t.co/WuCnkOzkfh

The Russian Times speculates that the containers located midship are support systems for the suspected railgun and highlights the similarities of the railgun to the one developed by BAE Systems.

The photos of the ‘Haiyangshan’ show a different weapon: a turreted and partially covered gun that has some similarities with a railgun developed by BAE Systems. Its barrel has a larger diameter about half the length closer to the turret and a smaller diameter for the half closer to the business end.

At least three containers, possibly with electronic equipment and generators to provide extra power for the suspected railgun, were seen on the ship. If proven true, China could become the first nation to test a railgun weapons system at sea.

A railgun uses a powerful electrical current to accelerate a metal projectile along a path of conductive rails to supersonic speed. The technology could replace gunpowder-based munitions as large-caliber artillery, but has some drawbacks, including high power requirements and rapid wear of the barrel, which has to withstand high temperatures and stress during the shooting process.

As we have explained before, militaries around the world are in a race to develop hypersonic weapons before the next major conflict breaks out. The Russian Times breaks down the technology behind the rail gun, but also offers insight into the status of America’s railgun program. Nevertheless, the next major conflict will be fought with hypersonic weapons, otherwise, why are countries around the world racing to acquire this technology?

A railgun uses a powerful electrical current to accelerate a metal projectile along a path of conductive rails to supersonic speed. The technology could replace gunpowder-based munitions as large-caliber artillery, but has some drawbacks, including high power requirements and rapid wear of the barrel, which has to withstand high temperatures and stress during the shooting process.

The US was long considered the frontrunner in the race to advance the technology. Last year, the Office of Naval Research (ONR) demonstrated a multi-shot salvo test – in which two projectiles were fired by a railgun in quick succession to prove the weapon can sustain a high rate of fire. But the future of the American EMRG program, which was supposed to produce a weapons system for the Zumwalt-class destroyers by 2020, is in question due to high costs.

What we are looking at below is the U.S. Navy’s electromagnetic railgun in Virginia.

Notice how the gun is not on a ship? Is the United States falling behind?