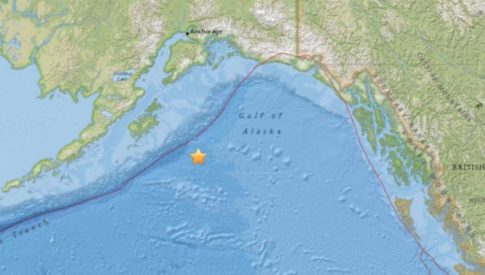 – “The Whole Town Is Evacuating” – Tsunami Headed For Alaska After 8.2 Magnitude Earthquake:

A powerful 8.2-magnitude earthquake detected in the Gulf of Alaska has triggered tsunami warnings in Alaska and tsunami watches across several Western states through British Columbia all the way down to San Diego…

Earthquake watches are also in effect for Hawaii

“Based on all available data a tsunami may have been generated by this earthquake that could be destructive on coastal areas even far from the epicenter,” the Pacific Tsunami Warning Center said.

The earthquake struck about 175 miles southeast of Kodiak, Alaska, shortly after midnight in Alaska local time, according to preliminary figures from the United States Geological Survey. The quake had a depth of about 6 miles, according to USGS. That depth, meteorologists pointed out, is relatively shallow, raising the risk of dangerous tsunamis in Alaska.

In Kodiak, first responders drove through the streets warning residents to “evacuate immediately”…

@KoloheBoy @saimin @PHOTOlulu saw 1 data on one of the buoys in the AK area went up 32 feet. PHUQUE! @Meteo_Reporter: https://t.co/BTymtpMMJK
VIDEO:#Tsunami Warning after 8.2 #Earthquake in #Kodiak, #Alaska | Jan 23, 2018

The U.S. Geologic Survey gave a preliminary magnitude of 7.9, while the National Weather Service put the final magnitude at 8.2.

In its warnings, USGS stated: “If you are in a tsunami warning area: Evacuate inland or to higher ground above and beyond designated tsunami hazard zones or move to an upper floor of a multi-story building depending on your situation.

“If you are in a tsunami watch area: Prepare to take action and stay alert for further information.”

“If you’re on the beach and the tide suddenly goes out, head inland immediately.”

Nathaniel Moore was on a boat docked in Kodiak when he felt the ground “shake really good for a minute.” He said the fishing vessel’s crew got off the boat after the earthquake to head for higher ground amid the tsunami warning.

“The whole town is evacuating,” he told CNN  early Tuesday.

Heather Rand, who was in Anchorage, Alaska, told CNN that the earthquake “was a slow roller, so it was felt for at least a minute before the real rolling started. Nothing fell off the walls and I didn’t have to wake my kiddo.”

She said it felt like the longest earthquake she had ever experienced.

“It was a very long, slow build up. Creepy, more than anything. Definitely the longest, and I was born here,” Rand said. She reported no damage besides cracks in the drywall.

Waves should be reaching the Alaska shoreline in an hour or so, meteorologists said.

10 thoughts on ““The Whole Town Is Evacuating” – Tsunami Headed For Alaska After 8.2 Magnitude Earthquake”