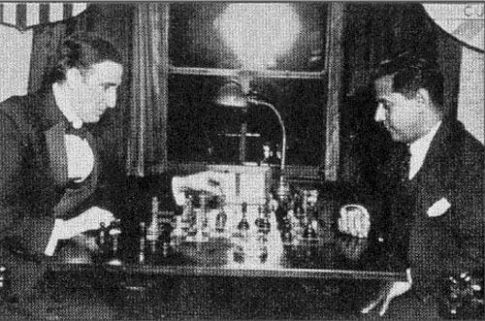 Black’s queen has been marginalized to an ineffective slot behind white’s still-standing and strongly-defended king-knight pawn. Capablanca is able to finally develop the resources patiently waiting on the queen side. Although not as flashy as Marshall’s full assault in the opening, Capablanca’s pawn attack comes at a better time and is much more devastating. A slow-motion invasion of black’s deserted queen side. –photo-mark.com

Others pointed out that Capablanca’s name translates to “White Hat” – a phrase commonly referring to an ethical computer hacker or government operative.

White has next move.

Given the timing of Assange’s Ecuadorian citizenship, at minimum the tweet suggests that some type of wheels are in motion, and Assange’s stay at the Ecuadorian embassy in London – going on six years, is close to an end.

On Wednesday we reported that Julian Assange had been granted an Ecuadorian passport based on information found on a government website – one day after Ecuadorian officials made a veiled threat to evict him from the Embassy. That day, Assange tweeted a picture of himself wearing an Ecuador football shirt – fueling speculation:

This was followed by Ecuador’s largest newspaper, El Universo, reported the news, citing “reliable sources”. And now, it is confirmed. More from Reuters:

The speculation was put to rest on Thursday, as the Ecuadorian Ministry of Foreign Affairs (MFA) announced that Ecuador had indeed granted naturalization to Julian Assange on December 12. The reaction of the MFA comes one day after Quito reportedly granted an ID card to Assange.

The nation’s foreign minister announced Thursday that officials had decided to permit Assange’s naturalization while they look for ways to resolve his situation.

Ecuador gave Assange political asylum after he sought refuge in the embassy in 2012 to avoid extradition to Sweden for investigation of sex-related claims.

Sweden dropped the case, though Assange has remained in the embassy because he is still subject to arrest in Britain for jumping bail.

The Ecuadorian passport could obtain his first step to obtaining diplomatic immunity, as Ecuador wants to resolve Assange’s indefinite embassy stay. The WikiLeaks founder has been holed up in the Ecuadorian embassy for five years.

Ecuador usually issues such ID cards for people claiming residency status, which are called cedulas. The Vienna convention on diplomatic relations states that someone who holds a diplomatic passport is immune from prosecution. It is still no guarantee, however.

However, as VoA reports, the UK Foreign Office rejected a request from Quito to grant the whistleblower diplomatic status. The passport was reportedly granted to him on December 12.

Ecuador’s foreign minister says the country is seeking a “dignified and just” solution with the UK government over Assange’s case. For now however, Assange isn’t going anywhere: