– Great Lakes freezing over ahead of schedule

– Temps to plunge below 15F in Deep South

–  A “Monster Of A Storm” Could Hit The East Coast Next Week:

“The potential for a strong coastal storm system is increasing next week as multiple pieces of energy come together. However, where this system tracks remains highly uncertain and will ultimately determine sensible weather impacts along the East Coast. Subtle changes to the forecast may be the difference between a snowstorm or more Arctic cold and little or no snowfall,” said Ed Vallee, a meteorologist who specializes in Northeast weather.

As the New Year’s festivities begin, the increasing threat of a major East Coast snowstorm is possible for the second half of the upcoming week. Recent Weather Channel computer models are in agreement that a surface low-pressure system will develop off the Southeast coast Wednesday, then charge up the coast towards the north-northeast over the western Atlantic Ocean Thursday. According to the report, “this low will also intensify at a rapid pace thanks to a sharpening southward plunge of the jet stream into the eastern U.S.”

With the cold air in place over the East Coast, the Weather Channel provides two scenarios of what could happen next week: 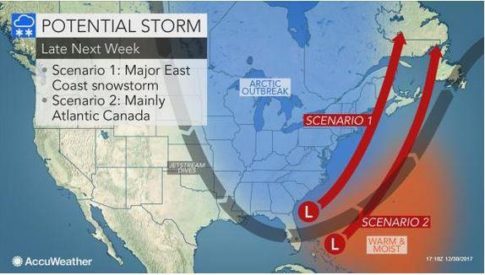 “This is likely going to be one monster of a storm later this week. Seeing ensemble members between 950-970mb with an ensemble mean of 982mb is absolutely impressive for a 5 day lead time,” said Ed Vallee.