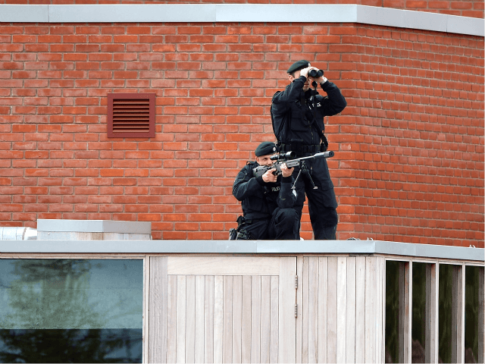 Then in June another attack was carried out at Westminster Bridge, with three men from outside the United Kingdom running down pedestrians in a hired van before running through streets and restaurants to Borough Market, stabbing people indiscriminately.

Later that month a British native, Darren Osborne, drove into pedestrians in Finsbury Park in a so-called reprisal attack, killing one Muslim man.

In August, Uber driver Mohiussunnath Choudhury deliberately drove at police officers outside Buckingham Palace before attacking them with a four-foot sword.

Then in September a number of people were burned or trampled when a Syrian refugee partially detonated a bucket bomb on an Underground train at Parsons Green tube station.

However, due to severe cutbacks and an increasing focus on channelling police resources into diversity projects and “hate crime”, there will actually be fewer officers patrolling this year’s New Year’s celebrations than in 2016.

The world-renowned Hogmanay celebrations in the Scottish capital of Edinburgh, too, will be marred by heightened anti-terror precautions this year.

Armed police will be present in record numbers, extra road closures have been announced, an anti-terror “ring of steel” installed at considerable cost, and the estimated 100,000 people attending the city’s famous street party have been urged for the first time not to bring bags with them, and been told to expect they will be searched if they do.