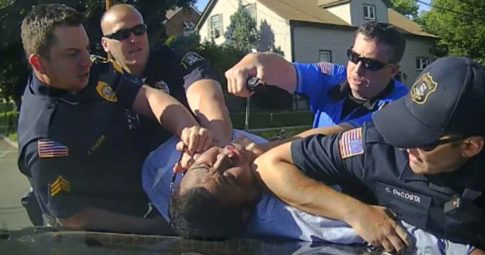 – WATCH: Man Yells at Cops So They Pepper Spray Him to DEATH & Cover It Up:

An investigation by an independent watchdog group revealed police claimed to be heroes after using pepper spray on a man until he died.

Highland Park, NJ — Twenty-eight-year-old Daniel Nagahama reportedly told Highland Park Police Department officers he’d gotten into a fight with his mother and was pushed out of her car, onto the street. That’s where officers first found the young man, lying face down in the middle of a suburban intersection. But by the end of the June 2016 interaction with police, Nagahama would be pepper sprayed to death, and the prosecutor’s office would spend the next year and a half lying about what really happened that day.

Some said Nagahama was drunk. Others said he got hit by a car, and still, others claimed he must have gotten into a fight. No one knows what caused Nagahama to be found nearly unconscious that summer day. But one thing’s for certain. He was still very much alive.

Nagahama had committed no crime and his only “offense” was to raise his voice to police officers, who subsequently attacked him for it. This would prove to be fatal.

From the dashcam footage, Nagahama appeared inconsolable but non-violent. However, once police began holding him down and shoving him into the front of their cruiser, Nagahama became frustrated and tried to break free. As he attempted to defend himself against the four armed officers, their force continued to escalate.

That’s when one officer can be seen taking out his pepper spray and holding it in front of the open mouth of the delirious young man. It’s unclear if Nagahama was sprayed at that moment, or when he was taken to the ground, away from the recording camera. In the next scenes, Nagahama can be seen on a stretcher, with hands handcuffed behind him, and placed into the back of a nearby ambulance.

He died three hours later in the hospital. It was later learned he had a history of asthma. The pepper spray, alone, seemed enough of a chemical weapon to snatch the young man’s life away. The prosecutor’s office is now taking fire for what a government watchdog group alleges was a clear case of cover-up.

Middlesex County Prosecutor’s Office (MCPO) Andrew Carey (prosecutor) contended, immediately following Nagahama’s death while in police custody, the police officers attempted to revive the young man once it was apparent he was not breathing. That contention, according to New Brunswick Today, is inaccurate. At the time of Nagahama’s death, the MCPO issued the following statement which reads in part:

​Middlesex County Prosecutor Andrew C. Carey said today that a 28-year-old man died at a hospital in New Brunswick, hours after he struggled with police who revived him when they found him laying on a street in Highland Park. The Middlesex County Prosecutor’s Office is investigating the death of Daniel Nagahama of Edison, who was pronounced dead at Robert Wood Johnson University Hospital on June 2, 2016 at 8:28 p.m….Nagahama was taken to the hospital after police stopped to assist the man, who was found on South Fifth Avenue in Highland Park on June 2, 2016 at 5:15 p.m. As police attempted to revive him, Nagahama became belligerent and struggled with police. He was not placed under arrest, but was taken to the hospital by rescue workers.

Notice, the official statement by prosecutor Carey’s office made no mention of the fact the police pepper sprayed the young man whom no one knew was either injured, drunk, having a break from reality, or using drugs. That minor omission from the official narrative was followed by a near-year and a half of the MCPO stonewalling an investigation by watchdog groups.

Following an in-depth investigation by New Brunswick Today, no mention of reviving Nagahama is found in any of the official police reports, or use of force reports filed by all the officers involved.

Acting on suspicions the MCPO was attempting to cover-up the death, a watchdog group known as “Libertarians for Open Government” sued the MCPO for failing to comply with New Jersey’s Open Public Records Act (OPRA). The watchdog group won in court and since their victory, a trickling of information has emerged. Predictably, the medical examiner’s report made no mention of pepper spray contributing to Nagahama’s death.

Now, other groups and members of the community are calling for an independent, outside agency to conduct an investigation into how a young man could wind up dead immediately following contact with first responders who were presumably there to ensure his safety. Instead, he was attacked, pepper sprayed, handcuffed, and allowed to die.

Instead of pressing charges against the officers involved in his death, the prosecutor’s office attempted to make heroes out of the man’s killers by saying they attempted to revive him. Just as with the nationally known case of Eric Garner, a man was killed after making contact with police and no one has still been held accountable. With the prosector’s office running cover for the officers, no one will likely ever have to answer for the young man’s death.