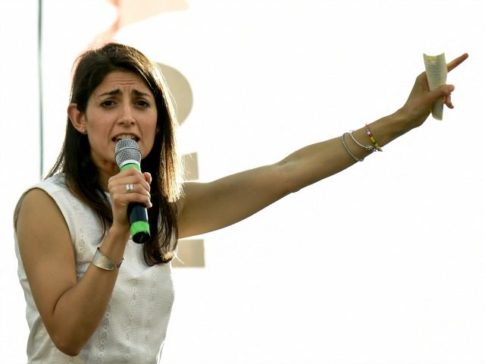 “This is a historic moment, a turning point,” said Raggi, who has been called “the Trump of Rome.”

“Today the Romans won,” Raggi said. “I want to thank all the Romans who have entrusted me with this task, which I will carry forward for the next five years.”

Raggi’s populist, Eurosceptic M5S party also gained control of the northern city of Turin, where another woman, 31-year-old Chiara Appendino, bested the sitting Democrat mayor with the help of backing from the right-wing Northern League.

The anti-establishment M5S was founded by comedian Beppe Grillo just seven years ago, and now posed a serious threat to the reigning PD.

The decisive victory of the populist movement in Rome and Turin is also indicative of a larger trend throughout Europe marked by diffidence toward what many see as the gradual surrender of national sovereignty to the European Union, especially in the face of a mismanaged European migrant crisis.

Raggi, who ran on a platform targeting corruption and cronyism, said that her election signaled the beginning of a “new era” for Rome. “We will work to restore legality and transparency to our institutions after 20 years of bad governance,” she declared in her victory speech.

“I will be the mayor of all Romans, including those who did not vote for me,” Raggi said.

Rome’s former mayor, the PD’s Ignazio Marino, was forced to resign over economic scandals and Rome had been mayorless since October. In the meantime, special commissioner Francesco Paolo Tronca had taken over the administration of the Italian capital.