Rothschild puppet Macron is only doing what he is told to do by TPTB.

– Did France’s Macron Submit To The Arab World?:

In Abu Dhabi, members of the victorious Israeli judo team were recently made to mount the winners’ podium without their own anthem and flag. A few days later, French President Emmanuel Macron landed in Abu Dhabi, where he denounced as liars those who say that “that Islam is built by destroying the other monotheisms”. Macron did not raise an eyebrow about the anti-Semitism and racism displayed by the Emirati authorities. Macron merely praised Islam in a country that punishes with death those Muslims who convert to Christianity or profess atheism.

At the French naval base in Abu Dhabi on November 8-9, addressing some businessmen, Macron insisted on the importance of the alliance with the United Arab Emirates (UAE) as an “essential partner with whom we share the same vision of the region and obvious common interests”. Such effusion seems more than the usual language of diplomacy. Macron is now showing a strategic empathy and commitment to the Arab-Islamic world. Is this statement a prelude to submission?

Far from defending the Judeo-Christian values ??on which France, the West and Europe itself was founded — such as individual liberties, freedom of expression, separation of the church from the state and the judiciary, and equal justice under the law — Macron in the last few weeks launched an apology for Islam before Arab-Muslim dignitaries.

On December 7, Macron went to Qatar; next year, he will visit Iran on a trip that will make him the first French president to visit the Islamic Republic since 1971. In Doha, Macron and Qatar signed contracts worth about 12 billion euros ($14 billion). And there, in a country which openly promoted anti-Semitism in its book fair, Macron repeated that he disapproved of US President Donald Trump’s decision to recognize Jerusalem as Israel’s capital.

A few days later, at the United Nations, Macron’s ambassador voted with the Arab and Islamic regimes; it was a crude betrayal of Europe’s only democratic ally in the Middle East: Israel. In a single week, France voted twice to support Arab-sponsored resolutions against the US decision to recognize Jerusalem as the capital of Israel, first at the UN Security Council then at its General Assembly. As Israel’s Deputy Minister for Diplomacy Michael Oren said: “The UN denies Israel’s bonds with Jerusalem”. Macron’s bonds with the Arab Islamic world, however, seem extremely strong.

Back in Paris, Macron welcomed Jordan’s King Abdullah II to the presidential palace and praised Amman’s role as the “guardian” of the holy sites in Jerusalem. Abdullah’s goal, however, is something else. As he openly says, he wants to prevent the “Judaization of Jerusalem” — which means fighting Israeli sovereignty over the holy city.

During his recent trip to Algeria, Macron, France’s first head of state born after the Algerian War, called France’s 132-year rule of Algeria “a crime against humanity”. The French president had no words of pride for anything the French had done or left behind in Algeria. In an apparent gesture of reconciliation, Macron said that he was “ready” to return to Algeria the skulls of Algerian fighters killed in the 1850s by the French army, which are currently displayed at the Musée de l’Homme in Paris.

This, then, was the balance of Macron’s recent frenetic trips to the Arab world: lavish contracts, apologetic words to Islamists, repentance of the French colonial past and silence on anti-Semitism and radical Islam.

Meanwhile, in France, authorities were busy dismantling its Judeo-Christian heritage. A superior court recently ordered the removal of a cross from a statue of the Pope John Paul II in a town in Brittany, because the cross supposedly breached rules on secularism. The Conseil d’État, France’s top administrative court, evidently decided that the cross violated a 1905 law imposing the separation of church and state. After that, the same Conseil d’État ordered a Nativity scene in the municipal hall of the town of Béziers to be torn down. Then, Macron’s special envoy for heritage, Stéphane Bern, proposed charging a fee to enter French cathedrals and churches — as if they were museums.

A few days later, however, France’s Macron displayed all the double-standards and empty rhetoric of this “secularism”. The French authorities allowed Muslims in the Paris suburb of Clichy La Garenne to a hold a mass prayer on the street. That is why 100 French politicians and administrators took to the streets of Paris to protest against these prayers. “Public space cannot be taken over in this way”, said Valérie Pécresse, president of the Paris regional council.

That is exactly the tragic dead end of French fake “secularism”: it allows public expressions of the Islamic religion in France, but prohibits the Christian ones.

In Paris, Saudi Arabia, a major focus of Macron’s foreign policy, is busy these days sponsoring “cultural initiatives”. Saudi Arabia has been involved in the renovation of the Institute of the Arab World, located in Paris. Jack Lang, the institute’s director, unveiled a plaque of gratitude to Saudi Arabia for the gift of five million euros that the kingdom made to the institute.

Then an unusual event took place in the Cathedral of Notre Dame, the most important site to French Catholics. Beneath its immense vaults, a small group of men in traditional Saudi clothes viewed the sculptures there. The delegation was led by Mohammed al-Issa, Secretary General of the World Islamic League, appointed about a year ago as the head of this organization, based in Mecca and devoted to the promotion of Islam throughout the world. As the newspaper La Croix noted:

“Saudi Arabia is one of the most conservative Muslim countries in the world. No religion other than Islam is recognized there. Clergy other than Muslims do not have the right to practice there and the construction of places of worship other than mosques is prohibited”.

So, Christian French authorities are opening their holiest sites to Islamists — as they do to everyone. These Saudis, however, prohibit others from practicing their faith in Saudi Arabia. This is “French suicide”, as Éric Zemmour warns in his most famous book, Le suicide français.

The Saudi crown prince just bought Leonardo da Vinci’s painting “Salvator Mundi,” for a record $450 million at auction last month. Then, the United Arab Emirates tweeted that the painting “is coming to the Louvre Abu Dhabi”, recently opened by Macron. What else of its heritage will Europe now sell? 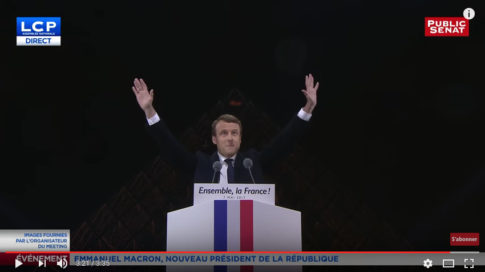