The new US ambassador to the Netherlands, Pete Hoekstra, is not off to a good start following an international embarrassment on Dutch TV in which he smugly denied every saying there are no-go zones in the Netherlands – calling the suggestion “fake news.”

Hoekstra – former congressman (R-MI) and chair of the House Intelligence Committee for two years, was asked by Dutch journalist Wouter Zwart of news program Nieuwsuur about comments he made in 2015:

Hoekstra: “I didn’t say that. This is actually an incorrect statement. We would call it fake news.“

Zwart then shows Hoekstra a clip of him saying exactly that:

A still-smug Hoekstra deadpans to Zwart, denying that he used the phrase fake news. “I didn’t call that fake news. I didn’t use the words today. I don’t think I did.”

Hoekstra – born in Groningen, Netherlands, was sworn in on December 11th by Mike Pence. In response, he said that he “made certain remarks in 2015 and regret the exchange during the Nieuwsuur interview. Please accept my apology.”

Ironically, as it turns out, there are several parts of The Netherlands which aren’t quite classified as “no-go” zones, but whose residents are approximately 80% immigrants. In 2007, The Netherlands Housing Ministry identified 40 “problem districts” to be transformed into “dream districts.” In a now-deleted (but archived) article, Dutch news outlet RTL Niews published 20 of the districts. 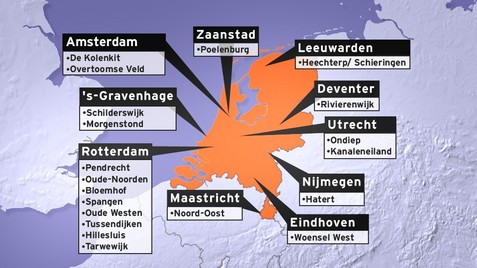 “no-go zones” in the Netherlands, geenstijl.nl

RTL Niews requested that the government release a ranking of the list from best to worst, which the Council of State – the highest court in the country, forbade. 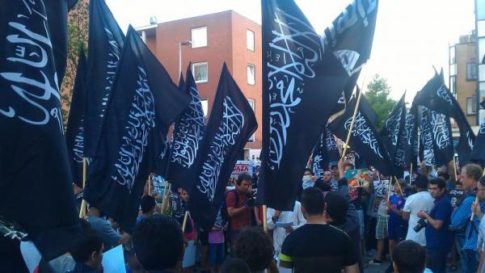 Dutch Islamists protesting the arrest of three men alleged to be recruiting for ISIS.

In 2014, three Dutch citizens were arrested on suspicion of recruiting for ISIS in order to assist its armed struggles in Syria and Iraq – leading many to call The Hague “jihad city” and “sharia triangle.”

One of those detained is 32-year-old Azzedine Choukoud, known as Abou Moussa, a charismatic Dutchman of Moroccan descent. He has been involved in demonstrations in recent years, and has been in contact with fighters in Syria. In a YouTube video, he congratulated the Muslim community on the establishment of the caliphate in Iraq and Syria. A few young men hold up a black IS flag in the background.

They come from Schilderswijk neighbourhood, which the media have renamed the “sharia triangle”. This neighbourhood primarily houses immigrants, as do many neighbourhoods in large Dutch cities – in this case more than 90 percent of the population are immigrants. Dissatisfaction is common and unemployment, crime, and poverty rates are higher than in the rest of the country.

In 2013, calls for an urgent debate in the Dutch parliament over the integration of Muslim immigrants after an area near the Hague known locally as “the Sharia triangle” is being run by a form of “Sharia police.”

The claims relate to the district of Schilderswijk, about two kilometres from the city centre, where an almost entirely Muslim population of some 5,000 people surrounds the El Islam mosque, fuelling criticism that the government has failed to ensure a proper ethnic mix in schools and local housing. One recent investigation, in which local people were extensively interviewed, concluded that Schilderswijk had become “orthodox Muslim territory” which was now largely ignored by the city authorities, by politicians and even by the police, on the grounds that it had become self-regulating. –Irish Times

The orthodox Muslims had become so dominant in the area that they were dictating neighborhood attire and behavior. In one incident, a local woman claimed that her daughter was approached and told that her short skirt was inappropriate, while her son had been called a “kaffir,” a racist term used against non-Muslims.

“Another man said he felt he was gradually being driven out of his home because he had a dog, and many traditional Muslims tended not to keep or favour dogs.”

So, as it stands, there are “no-go” zones in The Netherlands, depending on one’s definition. Perhaps Ambassador Hoekstra should have just owned up to his 2015 comments, since the coverup was – as always happens – worse than the truth.