Earlier this week the Washington Post reported that President Trump has decided to come off the fence regarding his prior reluctance to formally approve lethal arms sales to the US-backed government in Kiev, Ukraine, and has now moved forward with Obama-era legislation to export weapons to the war-torn country.

Though as was noted at the time this commercial license approval was limited to small arms and ammunition as part of an initial $41.5 million deal, and not the heavier anti-tank systems sought by Kiev, it now appears the White House is going to announce inclusion of Javelin antitank missiles and possibly other advanced systems that could change the battlefield calculus of the war between Ukrainian and Russian-aligned forces in the Donbass region along the Russian border.

According to a new report by ABC News, Trump is expected to include the anti-tank missile systems as authorized exports to Ukraine, this based on four unnamed state department sources:

President Donald Trump is expected to announce his approval of a plan to sell anti-tank missiles to the Ukrainian government, a move that would mark a significant escalation in lethal U.S. military support for Ukrainian forces battling Russian-aligned forces in the border region, four state department sources tell ABC News.

If the president formally signs off, the plan will be presented to Congress for a 30 day review period where it would need to be approved before the State Department can implement it. 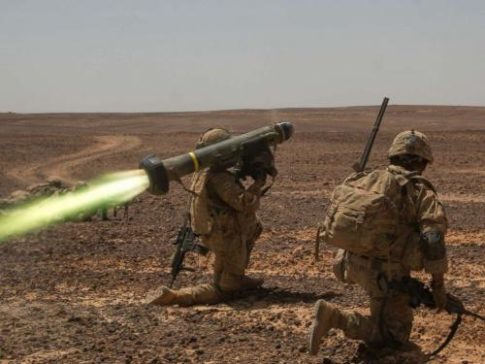 ABC News describes the “total defense package of $47 million includes the sale of 210 anti-tank missiles and 35 launchers” which will be sure to harm Trump’s longtime stated goal of improving relations with Moscow.

When news initially broke Wednesday of the lethal arms export plan, Kremlin officials said that the sale “will once again motivate the hotheads” in the Ukrainian government and “unleash bloodshed again,” while condemning it as an “irresponsible step.”

Meanwhile President Vladimir Putin stressed on Friday in statements not directly related to the news of US arms sales to Ukraine that Russia has a right to respond to US military build-up in Europe, which has seen NATO troop deployments in countries bordering Russia triple over a three-year time period, in a speech delivered at a Defense Ministry meeting in the city of Balashikha outside of Moscow. Putin characterized Washington’s new national security strategy as “aggressive” and “definitely offensive” according to Russia’s TASS news agency.

Should these new reports of anti-tank missiles for Ukraine be realized, it will certainly affirm and harden the Russians in their position, contrary to Trump’s repeat pledges on the campaign trail that “we’re going to have a great relationship with Putin and Russia.” In a 2016 news conference, for example, then candidate Trump had this to say to the deep chagrin of hawks like Senators John McCain and Bob Corker – who have both pushed for a more muscular confrontation with Russia:

You want to make a good deal for the country, you want to deal with Russia – and there’s nothing wrong with not fighting everybody, having Russia where we have a good relationship as opposed to all the stupidity that’s taken place.

But it appears that Trump is now falling into the hands of Washington’s usual warmongers and the national security deep state which always seems to eventually get its way. McCain issued a statement this week pushing for inclusion of anti-tank missiles in the earlier reported package: “I urge the President to authorize additional sales of defensive lethal weapons, including anti-tank munitions, and to fully utilize security assistance funds provided by the Congress to enable Ukraine to defend its sovereignty and territorial integrity,” McCain said.

Not to be outdone, Senator Tom Cotton (R., Ark.) – the only congressman who can possibly “out-hawk” John McCain – said of the new initiative for arms exports to Ukraine: “This is a break from failed Obama era policies to make Russia pay a cost for its aggression. With this decision, the Trump administration is reminding Vladimir Putin and his cronies that they lost the Cold War, and we won’t tolerate their bullying of our friend Ukraine.”

Is this a deep state victory? The Washington Post previously described that “the decision over whether to allow lethal arms sales to Ukraine had been sitting on Trump’s desk for months” even after The National Security Council presented the president with various options for moving forward “months ago”. But concerning the impetus behind internal White House deliberations to move on the issue, the Washington Post reported:

Another senior Trump administration official said that Trump personally approved the decision to allow the issuing of the license after being presented a decision memo by Defense Secretary Jim Mattis and Secretary of State Rex Tillerson. While there was never a formal ban on such weapons transfers, the decision was discussed internally as a lifting of the de facto Obama administration restrictions, the official said.

Congressional anti-Russia hawks have long sought greater long-term military engagement along Russia’s European border, especially after the May 2014 referendum which saw the pro-Russian Ukrainian regions of Donetsk and Luhansk declare independence from Kiev. And though Congress originally authorized weapons sales via the Ukraine Freedom Support Act signed into law in December 2014, the Obama administration never made the decision to actually follow through on the legislation.

But after years of covert American involvement in the Ukrainian proxy and civil war which has raged since 2014 – and which a leaked recording confirmed was precipitated by the US State Department – it appears that hawks like McCain, Cotton, and Corker are finally getting their way.

Perhaps more scary in terms of escalating an unnecessary war which has already taken more than 10,000 lives since 2014, the Kiev government and some in Washington are already pushing for putting anti-aircraft weapons in the hands of Ukrainian forces.

“What we are awaiting and have called for is the provision of lethal defense weapons that are more advanced – a larger package that is under consideration right now, including anti-tank and anti-aircraft missiles,” a Ukrainian official told ABC News. “We are expecting this decision and would welcome it.”

And as multiple reports have noted this week, fighting in eastern Ukraine is heating up after a period of relative stalemate and calm, and after general Western media silence on the war. Likely with the announcement of US supplied anti-tank missiles and the additional possibility of US anti-aircraft weapons being openly shipped into the conflict, it will most certainly return to the international and media spotlight.