After years of covert American involvement in the Ukrainian proxy and civil war which has raged since 2014 – and which a leaked recording confirmed was precipitated by the US State Department – President Trump has decided to come off the fence regarding his prior reluctance to formally approve arms sales to the Kiev government. Late Wednesday the Washington Post first reported the bombshell news that after months of indecision over whether or not to move forward with Obama-era legislation which initially paved the way for legalizing US arms sales to Ukraine, Trump has approved the first ever US commercial sale of weapons to the war-torn country.

According to The Washington Post, “administration officials confirmed that the State Department this month approved a commercial license authorizing the export of Model M107A1 Sniper Systems, ammunition, and associated parts and accessories to Ukraine, a sale valued at $41.5 million. These weapons address a specific vulnerability of Ukrainian forces fighting a Russian-backed separatist movement in two eastern provinces. There has been no approval to export the heavier weapons the Ukrainian government is asking for, such as Javelin antitank missiles.” 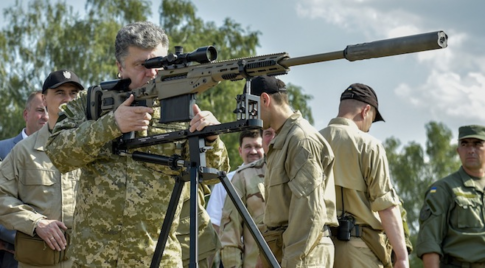 Though WaPo’s Josh Rogin characterizes the decision as intended to appease hawks while seeking to avoid broader conflict escalation based on “limited arms sales” (and not approving some of the heavier weaponry sought by Kiev), the move is likely to further ratchet up tensions with Russia, which is ironic for the fact that the decision comes the same week that former Director of National Intelligence James Clapper said that Russian President Vladimir Putin appears to be handling Trump like “an asset”. Or perhaps we will be assured this is just more 4-dimensional chess playing between Trump and Putin to prove that not Putin but the Military Industrial Complex is once again “unexpectedly” in charge?

Going back to nearly the start of the conflict, the US and EU have leveled increasingly harsh sanctions on Russia – first on individuals, companies, and banks – and then on Russian defense and energy sectors operating in relation to the Crimea. The US has long accused Russia of destabilizing the former Soviet republic along its southwest border, while Moscow credits American and European with engineering the Euromaidan coup in order to weaken Russian influence and suppress Russian-speaking minorities in Ukraine’s east.

Congressional anti-Russia hawks have long sought greater long-term military engagement along Russia’s European border, especially after the May 2014 referendum which saw the pro-Russian Ukrainian regions of Donetsk and Luhansk declare independence from Kiev. And though Congress originally authorized weapons sales via the Ukraine Freedom Support Act signed into law in December 2014, the Obama administration never made the decision to actually follow through on the legislation.

Senator Bob Corker is one such original co-sponsor of the legislation, who told the Washington Post concerning Trump’s decision to move forward, “I’m pleased the administration approved the sale of defensive lethal arms to Ukraine.” And he added, “This decision was supported by Congress in legislation that became law three years ago and reflects our country’s longstanding commitment to Ukraine in the face of ongoing Russian aggression.”

Concerning the impetus behind internal White House deliberations to move on the issue, the Washington Post reports:

Another senior Trump administration official said that Trump personally approved the decision to allow the issuing of the license after being presented a decision memo by Defense Secretary Jim Mattis and Secretary of State Rex Tillerson. While there was never a formal ban on such weapons transfers, the decision was discussed internally as a lifting of the de facto Obama administration restrictions, the official said.

And while somewhat soft-peddling the significance of the decision in terms of on the ground escalation in Ukraine, WaPo admits that this likely means the floodgates are now open on multi-national weapons exports to Ukraine, especially as it coincides with a similar measure approved by Canada earlier this week. The WaPo report continues:

“We have crossed the Rubicon, this is lethal weapons and I predict more will be coming,” said one senior congressional official. It’s likely no mere coincidence that Canada also approved lethal defense sales to Ukraine this week, which would happen only if the Canadian government knew the United States was on board, the official said.

The Trump administration notified leading congressional committees of the sale on Dec. 13 but didn’t make any public announcements, which some say reflects the sensitivity of the decision and concern about how it will be received by Trump supporters who long opposed the move, as well as by Putin.

Meanwhile, as the Washington Post also affirms, fighting in eastern Ukraine is heating up after a period of relative Western media silence on the war. And likely with this announcement it will return to the media spotlight.

During the presidential campaign Trump appeared to take a more conciliatory tone on the Ukraine and Russia issue, repeatedly stating that he would work with Putin to resolve the crisis while at the same time he resisted Republican efforts to include more aggressive language endorsing lethal assistance to Ukraine as part of the GOP platform.