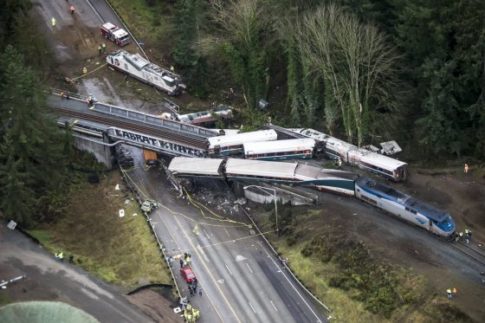 In yet another striking example of a pre-planned training drill being conducted at the exact same time as a real disaster or terror attack, DuPont Mayor Mike Courts has confirmed that a “mass casualty” drill was underway near the area of the horrific Amtrak train derailment that killed at least 3 people and left roughly 100 more injured.

That’s right, multiple agencies, as well as at least three mass casualty emergency vehicles, were already in the area “training” for a disaster when a real one apparently hit which has obviously raised a plethora of questions, especially when you consider past terrorists strikes that also had training drills seemingly go live.

As Infowars noted, “While the details of the train derailment in Olympia, Washington continue to come out, one particular fact is raising questions. There was a mass casualty event drill being staged at the exact time and place of the accident.”

The shocking revelation that authorities were “prepared” for the train derailment was initially revealed by a local ABC News reporter who directly confirmed that the mayor himself was in the area before the “accident” even happened.

“The mayor tells me, ironically today they were doing training for a mass casualty incident and that he was here, along with many other agencies, planning their day when this situation happened,” the reporter said.

The ABC report then went on to once again confirm that city officials were indeed carrying out a training drill at the exact time and place of the Amtrak train derailment.

“The good news is the DuPont mayor has said that city hall was going through a first responder mass casualty training situation when this happened so they were ready to go when they got the call,” the news anchor noted after detailing how quick emergency responders were able to reach the accident.

While this could obviously be a coincidence, one has to wonder whether or not this was actually some sort of false flag carried out by deep state operatives with a so far unknown goal. Keep in mind that this does not mean that the accident didn’t happen, rather it means that we are not being told the truth as to how and why the derailment happened in the first place.

As Shepard Ambellas wrote, “Just like 9/11 and the London bombing of 2007, the training drill somehow went live creating the exact scenario officials were enacting at the time.”

“Not saying it’s a hoax, merely wondering about the mathematical possibilities that such a tragic event should occur at exactly the same time and place as an exercise was being carried out by the authorities for such a ‘mass injury’ event.
Like London, Boston, 9/11 New York, and so on.
Aren’t these coincidences amazing.

God moves in mysterious ways. But the cabal care not who they maim & kill.”