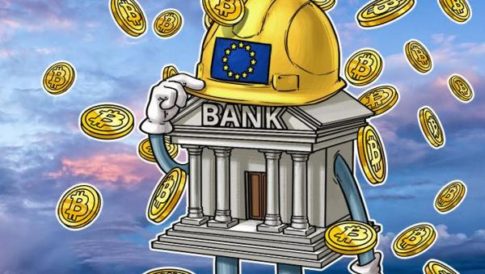 – Establishment Panic? G-20 To Discuss Bitcoin At Next Meeting:

Considering the lengths to which the G-20 goes to “not discuss” Japan’s burgeoning debt-to-GDP and monetization scheme, you know the elites are starting to panic when Germany backs France’s call for a full discussion on the regulation of Bitcoin at their next G-20 meeting.

As Coindesk reports, France’s finance minister is planning to push for a discussion on bitcoin regulation at a G-20 summit in 2018.

Citing French news network LCI, Reuters reported yesterday that Finance Minister Bruno Le Maire said in an interview that he will ask Argentina, which is set to take control of the G20 presidency, to put bitcoin on the agenda during an upcoming gathering in April.

Le Maire was quoted as saying:

“I am going to propose to the next G20 president, Argentina, that at the G20 summit in April we have a discussion all together on the question of bitcoin. There is evidently a risk of speculation. We need to consider and examine this and see how … with all the other G20 members we can regulate bitcoin.”

How that conversation will play out remains to be seen. Representatives from G-20 nations have previously discussed the topic through the Financial Stability Board (FSB), which has been studying the tech since 2016.

Indeed, that Le Maire would want to push in this direction is perhaps surprising, given France’s proactive stance on regulation around the tech. For example, earlier this month the French government gave its approval to new rules that will allow unregistered securities to be traded on a blockchain.

Additoinally, as Bloomberg reports, Germany joined European governments pushing for global bitcoin regulation amid mounting alarm that the world’s most popular digital currency is being used by money-launderers, drug traffickers and terrorists.

Germany’s Finance Ministry said it welcomed a proposal by French Finance Minister Bruno Le Maire to ask his counterparts in the Group of 20 to consider joint regulation of bitcoin. The concerns are shared by the Italian government, which is also open to discussing regulation, while the European Union is bringing in rules backed by the U.K. that would apply to bitcoin.

“It makes sense to discuss the speculative risks of virtual currencies and their impact on the financial system at international level,” the Finance Ministry in Berlin said in an emailed response to questions. The next meeting of G-20 finance ministers and central bank governors would be “a good opportunity to do so.”

But is there a hidden agenda here?

While hiding behind the pretense of cracking down on money laundering and tax evasion, one wonders if this is not more about protecting European banks…(via CoinTelegraph)

Last Friday, Reuters reported that EU states had agreed to implement stricter rules on the use of cryptocurrencies. With an eye on cracking down on money laundering and tax evasion, the efforts are calling for more transparency from exchange operators. European Commissioner for Justice, Consumers and Gender Equality V?ra Jourová said:

“Today’s agreement will bring more transparency to improve the prevention of money laundering and to cut off terrorist financing.”

In an interview with RT, former MI5 intelligence officer Annie Machon insists that the European Union decision to tighten up regulations on cryptocurrency exchanges is mainly being done to protect the interests of big banks.

Analyzing the situation, Machon said it’s like any other knee-jerk reaction, as old ways and new collide:

“I think we have a situation where any new form of technology on the internet, we’ve seen this for the last 30 years, that challenges the business models of established businesses is going to be cracked down on by governments, by international organizations to try and protect the old business models.”

“And we have seen it again in the attack on the old business model of the old media where piracy became the new threat and they tried to use laws to stamp that out. I think that is inevitable, if we have something that decentralizes the money supply and threatens the business model of the banks, of course, there’s going to be pushback against it.”

Machon conceded that criminals would inevitably use Bitcoin and other cryptocurrencies – but that doesn’t stop them from using banks either. Using that is an easy excuse to infringe on people’s privacy, according to the former MI5 official:

“Any crackdown on our rights of privacy on the internet always has an excuse that it is trying to stop money laundering or trying to stop terrorism or pedophiles or whatever. I think, probably the vast majority of users of Bitcoin are doing it legitimately, they just have a legitimate concern to uphold their right to privacy as well.”

It is commonplace for Bitcoin and other cryptocurrencies to get a bad wrap from past associations to dark web marketplaces. But as Machon reminds us, some banks hands are dirty as well:

“Yes, sure, criminals are going to use this, but criminals already use banks. So many banks have been caught out money laundering on vast scales and have received vast fines for laundering gray and black money from particularly the drug trade. Perhaps, we should say that the EU should close down our banks, too.”

What is perhaps most notable is the lack of pushback against cryptocurrencies from Japanese officials who have gone out of their way to ‘ignore’ or ‘study’ Bitcoin before making any damning prognostications.

Could it be that this is Japan’s secret reflation scheme… remember Japan makes up the bulk of Bitcoin trading currently world wide.