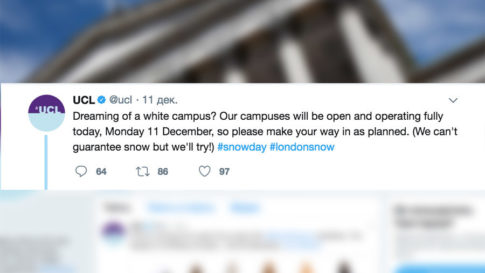 – ‘Snowflake students’ get University to apologize for calling snow white:

University College London was forced to apologize after a “dreaming of a white campus” tweet was deemed racist by “snowflake students.” The tweet had been intended to let students know the campus was still open as some parts of Britain remained covered by 13 inches of snow.

The tweet said: “Dreaming of a white campus? Our campuses will be open and operating fully today, Monday 11 December, so please make your way in as planned. (We can’t guarantee snow but we’ll try!) #snowday #londonsnow.”

One twitter user replied: “You know who else dreamt of a white campus? Hitler, that’s who. Disgusting.” Kumail Jaffer, a PPE student at Warwick University urged UCL to “retract and apologize.” He added that if anyone does not understand why the comment is offensive, they should “look into the history of the oppression of the PoC [People of Color],” according to the Telegraph.

UCL quickly apologized for the tweet, saying it “chose our words very poorly … We’re sorry and we’ll choose out words more carefully in the future.” The university explained it had been referring to the song ‘White Christmas,’ and posted a link to a YouTube video of the 1942 song, which was written by Irving Berlin.

We chose our words very poorly yesterday when thinking of this song: https://t.co/G5ZthTn8NT We’re sorry and we’ll choose our words more carefully in the future.

The university’s response, however, caused even more uproar online, with hundreds of replies blasting their apology. Many felt it was unnecessary, claiming the university was “crumbling” under pressure from “snowflake” students.

Jennie Powell wrote on Twitter: “You really are absurd … how can anyone be offended by the fact that snow is white? Nobody can change that, get a grip.” Stefan Roy added: “Seriously why are you pandering to such nonsense? They’re clearly trying to find offense when there’s none there … And you apologizing just makes it worse.”

Staff @ucl apologising for mistakenly announcing yesterday that snow was white. Deeply repentant for their hideous thoughtcrime, they confess their sins before the assembled student body. pic.twitter.com/x3r790RYcC

It’s absolutely barmy that you feel the need to apologise for referencing a song about snow at Christmas when there was, errr, snow at Christmas. In a world full of real problems, why the hell is this an issue?

Another tweeted: “It’s absolutely barmy that you feel the need to apologize for referencing a song about snow at Christmas when there was, errr, snow at Christmas. In a world full of real problems, why the hell is this an issue?” Another said: “Oh ffs. Stop crumbling to pressure by permanent offendotrons.”

White Snow again, flaunting its privilege. What about the minorities, such as yellow snow, brown snow, that icy crap we get most of the time, and sleet?

Wow UCL accused of racism for referring to snow as ‘white’! WTF is this country now?

One Twitter user wrote: “The little liberal snowflakes need to stop making everything racist and getting offended easily. Put your big boy and big girls pants on and learn to act like adults!” Another user said: “How desperately unhealthy does your mind need to be to attempt to shoehorn racism into a lyric about snow? How do these people get their socks on in the morning?”

It’s amazing that liberal and deranged snowflakes are offended by white snow.

Earlier this week, Oxford Brookes University was criticized for closing its buildings due to “heavy snow,” with students arguing that they need access to libraries to study.