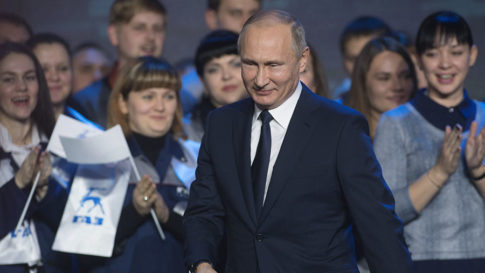 Vladimir Putin has confirmed that he will seek another term in office in next year’s presidential election.

“Yes, I will run as a candidate for the Russian presidency,” Putin said. He was meeting with workers at the country’s historic manufacturer, GAZ (Gorkovsky Avtomobilny Zavod), in Russia’s Nizhny Novgorod on Wednesday.

“Our country is its people, people like you,” the Russian leader said, addressing workers and veterans of the plant. “It’s workers, scientists, engineers, designers, teachers and doctors,” Putin said, adding that with the “active involvement” of its people, Russia “can deal with any, even the most complex challenges it faces.”

“Russia will go only forward and no one will ever stop it,” he added.

Earlier in the day, the president attended the Russian Volunteer 2017 award ceremony in Moscow, where he asked the audience whether they would support his decision to run. The answer was seemingly a unanimous “Yes.”

“When I make [the decision], I will certainly keep in mind our conversation today and your reaction,” Putin said. He added that “the motive behind [this very responsible decision] can be only the desire to make people’s lives in our country better and make the country itself more powerful and protected.”

The upcoming election on March 18 will be the fourth in Putin’s political career. He held the office of president for two terms from 2000 to 2008, and served as prime minister from 2008 to 2012. Putin then won a third term as president in 2012.

Earlier, Russian media reported that he may run as an independent candidate. The Russian president enjoys a high approval rating, with over 82 percent of Russians supporting him according to a poll conducted by state-run VTSIOM in late September.

“Can you imagine the power vacuum if he stands down?”