by Paul Pryce. With degrees in political science from both sides of the pond, Paul Pryce has previously worked as Senior Research Fellow for the Atlantic Council of Canada’s Canadian Armed Forces program, as a Research Fellow for the OSCE Parliamentary Assembly, and as an Associate Fellow at the Latvian Institute of International Affairs. He has also served as an infantryman in the Canadian Forces.

Turkey announced on 30 September 2017 the establishment of its largest overseas military base, in the Somali capital of Mogadishu (see video above). The facility, which cost approximately $50 million US, is intended to train 10,000 soldiers for the Somali National Army, which is struggling to maintain security against the threat of al-Shabaab, an affiliate of al-Qaeda that briefly seized power in Somalia and continues to wage an insurgency throughout the region. This move has led some observers to argue that Turkey’s President Recep Tayyip Erdogan has adopted a neo-Ottoman foreign policy orientation, seeking to re-establish Turkish dominance in the region that once fell under Ottoman rule. In fact, the motivations behind the Turkish military presence in Somalia are more complex.

There has been some history of Turkish military involvement in the region; for example, NATO’s anti-piracy efforts in the Gulf of Aden, known as Operation Ocean Shield, have seen the participation of Turkish naval vessels. The construction of the base in Mogadishu, however, began in 2015, as a period of political isolation for Turkey began. In November 2015, a Russian Sukhoi Su-24M attack aircraft was shot down by a Turkish Air Force F-16 fighter jet when the former allegedly violated Turkish airspace near the Syrian border. According to the Russian Federation’s Foreign Minister, Sergei Lavrov, the incident prompted Russia to seriously re-evaluate its relationship with Turkey. After failing to persuade other NATO member states to invoke Article 5 of the Washington Treaty – the collective defence provision which underpins the trans-Atlantic alliance – in response to security threats on the Turkish-Syrian border, Turkish officials have threatened that their forces would not hesitate to engage in combat against American military advisers that have been deployed to Syria in support of Kurdish paramilitaries.

Clearly, the country’s political elites recognize that Turkey is in dire need of allies, a possible rapprochement with Russia notwithstanding. One possible means by which Turkey can win friends on the international stage, such as votes in favour of its positions in the United Nations General Assembly and other similar bodies, is to enhance its outreach in sub-Saharan Africa. 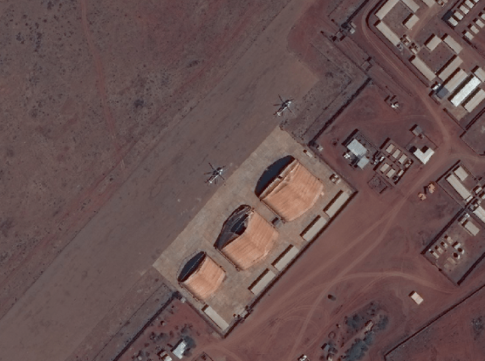 Baledogle Airfield, Somalia, 17th February 2017: These are two Mil Mi-8 or Mil Mi-8M / Mil Mi-17 helicopters, most probably from the UN. For example “Ukrainian Helicopters” is not only flying for the UN in Kenya, there are also operating in Somalia (see also this video).

The upcoming withdrawal of the African Union Mission in Somalia (AMISOM) – which saw the deployment of more than 20,000 troops to Somalia from other African states in order to provide security and train the Somali National Army – presented an opportunity for Turkey to secure a foothold on the continent. In 2016, President Erdogan embarked on a flurry of state visits throughout Africa, which included announcements of development assistance projects and business partnerships in Cote d’Ivoire, Ghana, Guinea, Kenya, Madagascar, Mozambique, Nigeria, Somalia, Tanzania, and Uganda. Although it is certainly true that all of Turkey’s overseas military bases are located in countries which were under Ottoman rule at one point or another – specifically, Azerbaijan, northern Cyprus, Iraq, Qatar, and now Somalia – Turkey has directed its outreach toward countries beyond that traditional sphere of influence, as evidenced by the fact that, aside from Somalia, none of those African states visited by President Erdogan in 2016 were affiliated with the Ottoman Empire.

Furthermore, it is highly doubtful that the Somali authorities see this new partnership with Turkey as reflecting a neo-Ottoman impulse. Since the ouster of al-Shabaab from Mogadishu, Somalia’s internationally recognized government has sought the assistance of various other countries and institutions, particularly in the military sphere. The European Union has maintained a training mission, first in Uganda and later in Somalia, for the purpose of building the Somali National Army’s capacity to fight militant Islamist groups. The United States also reportedly maintains a limited presence near Mogadishu, at Baledogle Airfield. For its part, Somalia has courted Russia for assistance and arms, while it has also petitioned Saudi Arabia to intervene against the United Arab Emirates’ plans to establish an airbase in the secessionist region of Somaliland.

In short, the Turkish base in Mogadishu reflects the search for reliable friends by both sides, rather than some grand design to regional power by Turkey’s political establishment. As Erdogan clamps down on his domestic opposition and girds for potentially renewed hostilities with Kurdish separatists, the support of countries like Somalia, which are also contending with their own secessionist movements, will be valuable. So long as Turkey is able to limit the exposure of its troops in Somalia, Erdogan’s supporters will likely see this as a profitable investment; an attack by al-Shabaab or a similar group on the base, however, would severely undermine public support and very seriously hamper Turkey’s African outreach. That may be the most glaring weakness of Turkish foreign policy under Erdogan: shared interests are impermanent and realpolitik relies on the fickle vagaries of fate, while shared values might afford a more solid foundation for an alliance. According to the text of the Washington Treaty, NATO is based on such shared values as “democracy, individual liberty, and the rule of law”. One would be hard-pressed to name a foundational shared value for the Turkish-Somali alliance.