This is a direct attack on #Iran. Iran & #Hezbollah were invited by #Syria to fight Wahhabi mercenaries. #Israel has once again violated international law by attacking a sovereign state. Will the #UN take this up? Will #Trump & #NikiHaley protest? https://t.co/OAtWFpizpi

UPDATE: Target of Israeli airstrike in #Syria was Iranian military base 13km from Damascus – reports https://t.co/Tmh1CqFLYa

– How A Dubious BBC Report Gave Israel The “Green Light” For Last Night’s Attack On Syria:

Syrian state television has confirmed that Israel attacked a military base outside of Damascus overnight on Friday, which Israeli media reports involved both surface-to-surface missiles and airstrikes, while Syria says its air defense systems were engaged and intercepted two missiles. Like other recent strikes inside Syria, the Israeli jets reportedly fired from over Lebanese airspace, in order to avoid both Syrian anti-aircraft missile systems and provoking a Russian response. Though the extent of the damage or casualties is not yet known, Syrian media has confirmed material damage to the base, and other reports indicate mass power outages in some of parts of Damascus occurred immediately after the attack, which SANA says happened at 12:30am local time.

It appears the base is likely the same one featured in a November BBC report which showed satellite images detailing the purported construction and renovation of an “Iranian military base” near El-Kiswah, which lies 14 km (8 miles) south of Damascus. As we’ve noted before, the BBC report was dubiously sourced to “a Western intelligence source” and the story was quickly utilized by Israeli leaders to ratchet up rhetoric in preparing its case before the international community for further attacks on the supposed Iranian targets. Israel has long justified its attacks inside Syria by claiming to be acting against Hezbollah and Iranian facilities and arms depots. 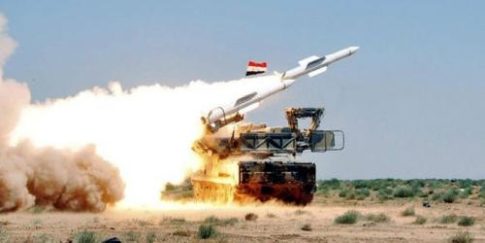 #Syria Another Video allegedly showing Syrian Anti Air Defense intercepting one of the Israeli Missiles launched towards the countryside of Damascus pic.twitter.com/xIeS4MTjJI

Indeed, BBC itself used ambiguous language in saying the satellite images “seem to show” construction activity at the site referenced by the intelligence source between January and October this year. However, the images don’t actually show much at all related to an Iranian military presence, but merely a series of two dozen large low-rise buildings – likely for housing soldiers and vehicles, which would be expected of any state army or sovereign nation.

Furthermore, the very title of the November piece – “Iran building permanent military base in Syria – claim” – underscores the complete lack of evidence for such a claim, which the BBC notes in the article is “impossible to independently verify.”

Yet in reporting last night’s Israeli strike on Syria, the BBC uncritically referenced its own prior unconfirmed “claim” to paint a picture that Israel is actually taking action against Iran and Hezbollah: “Israel has hit weapons sites before, in a bid to prevent arms being transferred to Syria’s Lebanese ally Hezbollah. Arms convoys in particular have been singled out by the Israeli air force.”

And the BBC followed this with:

Last month the BBC revealed a claim that Iran was building a permanent military base near the town. A series of satellite images showed construction at the location of the alleged base, which was made known to the BBC by a western intelligence source.

Israeli Prime Minister Benjamin Netanyahu has previously warned that Israel would not allow Iran to establish any military presence in Syria.

So it appears the BBC is playing war propagandist for Israel, instead of including any level of critical inquiry regarding Israel’s unprovoked act of aggression against its neighbor. In short, the BBC spread what it acknowledged to be a mere “claim” based solely on an unnamed “Western intelligence source”. Then Israel used that claim to attack Syria, after which the BBC in circular fashion justified the attack based on its own original dubious “claim”. 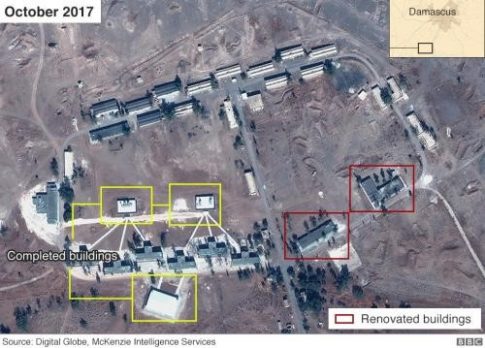 Meanwhile, just about every major Israeli newspaper in today’s reporting is prominently featuring the prior BBC report as justification for the latest attack on Syria. The Times of Israel provides one such example among many when it says:

The alleged Israeli attack came three weeks after the BBC reported that Iran was building a permanent military base in Syria just south of Damascus. The British broadcaster commissioned a series of satellite pictures that showed widespread construction at the site.

Or see this op-ed in the Jerusalem Post today which references the BBC report as a watershed moment:

The attack raises several questions. Why wait so long to strike the Iranian base? What did “western intelligence sources” hope to accomplish by publishing information on the Iranian base? Why were the Iranians at the site given time to leave by their base becoming so public? The month’s activity appear to be part of a complex game being waged by Iran to entrench itself in Syria and Israel’s attempts to warn the Iranians off. Whatever was taking place at El-Kiswah had plenty of time to be wrapped up and moved if the Iranians were concerned about it being struck. If the reports about Israel’s threats to target sites between 40-60km from the Golan are accurate then it would indicate that the warnings have been manifested.

And nearly every major Israeli media source is also republishing the BBC satellite images as part of their reporting on the overnight strikes.

As we’ve long pointed out, anytime that Israel carries out acts of aggression against Syria, it can just blame Iran or Hezbollah and escape international criticism or condemnation. International media and Western governments have already demonstrated a penchant for towing the Israeli line whenever Iran can be conceivably blamed as a culprit – evidence or no evidence – this as Prime Minister Benjamin Netanyahu has made it official Israeli policy to oppose Iranian presence in Syria.

Yet what key facts do the BBC and others leave out?

On Tuesday Israel’s own Defense Minister Avigdor Lieberman said that there are no Iranian military forces in Syria, but instead merely stuck to acknowledging “Iranian experts and advisers”. In comments to Israel’s Ynet news, Lieberman admitted, “It is true that there are a number of Iranian experts and advisers, but there is no Iranian military force on Syrian land.”

In other words, Israel’s top military chief very publicly contradicted both Netanyahu’s and the BBC’s claims of Iranian military bases on Syrian soil, yet the BBC neglected to mention such essential information. Thus, it appears that the mainstream media is preparing us for war… but sadly, this is nothing new.