– The Corporate Earnings Fiction in Q3:

The Biggest Sinners in the Dow.

All 30 companies in the Dow Jones Industrial Average have now reported earnings for the third quarter. As required, they reported these earnings under Generally Accepted Accounting Principles (GAAP). These standardized accounting rules are supposed to allow investors to compare the results of different companies. But that’s too harsh a fate for many of our corporate heroes, and so they proffer their own and much more pleasing accounting strategies – as expressed in “adjusted” earnings and “adjusted” earnings per share (EPS).

Of the 30 companies in the DJIA, 14 reported “adjusted” or “non-GAAP” earnings in Q3 that were significantly higher than their GAAP earnings. Total “adjusted” EPS of these 14 Dow components exceeded their total EPS under GAAP by 26%! Nice work!

The biggest sinner: Merck & Co. miraculously turned its loss of -$0.02 per share under GAAP into an “adjusted” profit of $1.11 a share. This is not a “one-time” event either. Merck keeps showing up in the ignominious top five Dow earnings adjusters time after time. Among the repeat offenders in the top five are also Pfizer, Coca-Cola, and GE.

So the theory that these are “one-time items” that should be excluded – even if that theory ever made sense – falls apart if it happens quarter after quarter.

The chart below shows the 14 Dow components with EPS that have been inflated by adjustments, and the percentage difference between their EPS under GAAP and their “adjusted” EPS. I cut Merck’s bar off because it goes to 5,650%, which would be about 12 feet beyond the edge of the chart. Wal-Mart Stores inflated its earnings by 72% and DowDuPont by 67%, and Warren Buffett’s favorite beverage company by more than half: 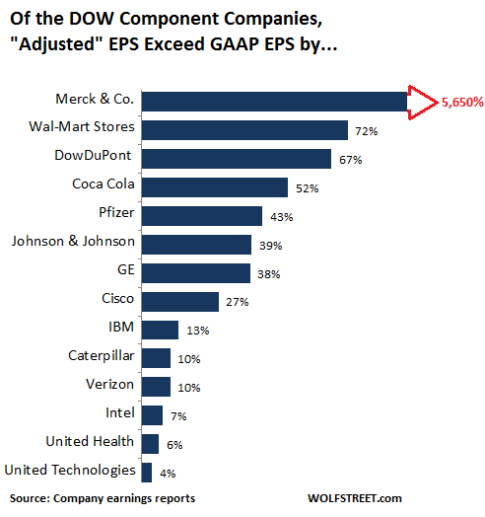 Under increasing pressure from the SEC, some of them disclosed GAAP earnings upfront in their earnings report, before pointing at non-GAAP earnings. Others were not so forthcoming. J&J’s GAAP EPS was particularly cumbersome to dig up, buried in the earnings release all the way down in the Non-GAAP reconciliation schedule.

These are among the large companies in the US that are deemed to be the most representative of their industries. They tend not to go entirely crazy, unlike smaller companies that haven’t yet figured out how to make money and that desperately need to show some kind of positive results.

Twitter is a good example. It’s not in the DJIA. It loses money every year, but after its adjustments, there’s always a fat “adjusted” profit. In the last quarter, it lost $21 million under GAAP, on declining revenues. But after it got through “adjusting” a lot of expenses out of the way, its non-GAAP income was $78 million. This took its loss per share of $-0.03 under GAAP to an adjusted profit of $0.10 per share.

These kinds of tricks work miracles. They’re promoted endlessly on Wall Street. And many companies use them. Even though GAAP gives companies a lot of leeway to beautify their results, it’s just not enough to hype stock prices sufficiently.

Even the SEC has lost patience with companies promoting their beautified non-GAAP measures. Since last year, it has been admonishing them about the prominence of these “adjusted” numbers in earnings presentations and in press releases. Some companies have since abandoned “adjusted” earnings. But many others – including about half of the Dow components – are still doing it.

Wall Street loves nothing more than to tout these “adjusted” earnings and how they “beat” expectations that have been lowered in prior weeks so that they could be beat. And given the grossly inflated stock prices, boosting earnings with “adjustments” is a game that is just too good to stop.

Finally time to make some easy money by betting on the collapse of certain brick-and-mortar retailers, years after it began? Here’s a grisly thought: there’s an ETF for that. Oh Lordy. Read…  Wall Street Discovers the Brick-and-Mortar Meltdown

“Here is a classic case of papering over the cracks to give the false impression that all is well.

Those of us who study and search out the real facts know the western economy has all but died.

Using bullshit statistics and ‘get out’ clause methods of reporting results is actually criminally misleading, but the fact that the authorities and media remain silent shows collusion to lie to the ordinary people.”