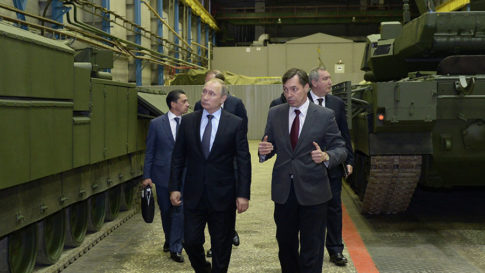 – Putin orders Russian companies to be ready for urgent transition to war-time operations:

Russian President Vladimir Putin says that all major Russian companies, both state-owned and private, must be ready for a rapid transition to war-time operations, adding that the capability is crucial to national security.

According to the Kremlin press service, the Russian president made the statement on Wednesday at a conference with senior defense ministry officials and top managers of major defense companies.

“I would like to note that the ability of any economy to rapidly increase the output of defense products and services when it is needed is one of the most important conditions of the nation’s military security. All strategic and… large enterprises must be ready for this,” Putin stated.

The Russian leader added that he and senior defense officials already discussed the issue in 2015 and 2016, and asked those attending the meeting to report which problems of the previous years had been dealt with and which had not.

The conference concerned the results of the Zapad 2017 military exercises held by the Russian and Belarusian military forces in September. Russia sent around 3,000 troops to neighboring Belarus, where they trained at six locations, along with 7,000 soldiers and officers from the host nation. Russia accepted Belarusian troops at three of its own military sites.

Fewer than 13,000 troops took part in the exercise in total, according to figures from the defense ministries of Russia and Belarus. Around 70 aircraft, 680 armored vehicles, including 250 tanks, 200 artillery guns, and 10 warships, were deployed by the two nations.