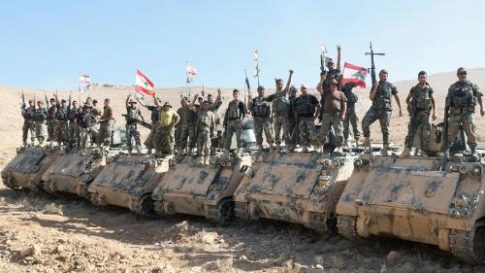 Two days after Israel provided the first ever official confirmation of covert ties with Saudi Arabia, a step many analysts see as a precursor to future conflict in the Middle East involving adversaries Iran and Lebanon, on Tuesday the head of the Lebanese Army told the military to be at “full combat readiness” to face “the Israeli enemy” at the country’s southern border. The announcement comes as Arab nations, including Saudi Arabia, vow to tighten their grip on Lebanon’s Hezbollah militia.

“The army needs to be prepared to “confront the threats and violations of the Israeli enemy and its hostile intentions against Lebanon,” Joseph Aoun said on Tuesday, while urging the army to cooperate with United Nations forces in Lebanon under UN Security Council Resolution 1701, adopted to resolve the 2006 Israel-Lebanon conflict. The statement came after Lebanese President Michel Aoun said that “Israeli targeting still continues and it is the right of the Lebanese to resist it and foil its plans by all available means,” according to Reuters.

President Aoun’s remarks were echoed by Lebanese Foreign Minister Gebran Bassil, who also cautioned Tel Aviv against sparking a war, according to RT. Lebanon is ready to act, but will do its utmost to prevent Israel from an invasion, he told RT last week. “We should restrain Israel from starting a war exactly because Lebanon is sure to win it,” he said.

As reported at the start of the month, Lebanon has been undergoing a deep political crisis after Prime Minister Saad Hariri abruptly resigned on November 4 in a televised statement from Saudi Arabia. In his resignation address, Hariri accused Iran and Shiite Hezbollah militia of sowing strife in Arab countries.

As further reported, on Sunday the Arab League called an emergency meeting in Cairo blaming Iran for destabilizing the region. The alliance also described Hezbollah as a terrorist organization, but stopped just short of threatening any action against either. Ahmed Aboul Gheit, the Arab League’s secretary-general, said its members may reach out to the UN Security Council to discuss possible steps against the Islamic republic.

Meanwhile, Tehran dismissed the Arab League statement on Iran, saying it was “full of lies” and the product of Saudi “pressure and propaganda.” Iranian Foreign Ministry spokesman Bahram Ghasemi called on Saudi Arabia to stop its “barbaric attacks” in Yemen. He also called on Riyadh to drop its embargo on Qatar, a country which has close ties to Tehran.

On Tuesday, president Aoun defended Hezbollah, saying his country had been subject to Israeli invasions for decades and therefore had the right to protect itself. Aoun rejected “insinuations accusing the Lebanese government of partnering in terrorist acts.”

“Lebanon has confronted Israeli aggressions from 1978 until 2006 and has been able to liberate its territories,” he added, as cited by National News Agency.

For those who may have missed some of the recent, rapidly moving events in the region, here is a quick rundown:

Saudi Arabia, a regional arch-rival of Iran, has recently demanded that the Lebanese government pressurize Hezbollah to disarm, and also threatened to take action against Iran’s “aggressive” involvement in the affairs of Yemen and Lebanon. Speaking to Reuters last Thursday, Saudi Foreign Minister Adel Al-Jubeir said Riyadh is “reacting to that aggression and saying enough is enough.”

The bellicose statements from Saudi Arabia notably coincided with comments made by Israel’s top political and military brass. On Sunday, Israel’s Energy Minister Yuval Steinitz told Israeli Army Radio that cooperation “with the moderate Arab world, including Saudi Arabia, is helping us curb Iran.” Steinitz added that his country, which fought Arab nations in several wars, is “usually the party that is not ashamed” of such ties.

The disclosure comes days after Lieutenant General Gadi Eisenkot, chief of staff of the Israeli Defence Forces (IDF), said that Tel Aviv is willing to contribute to “a new international alliance” in the Middle East, which is determined “to stop the Iranian threat.” He said that, while Israel does not planning on striking Hezbollah, it is ready to share intelligence on Iran with Saudi Arabia. Tel Aviv and Riyadh do not have diplomatic ties with each another.

Earlier this week, Iran reiterated once again it is determined to bring lasting peace to Syria, while its Gulf neighbors are sparking tensions in the region. Tehran has been working with international allies such as Russia and Turkey to ensure ceasefire in Syria and pave the way for political reconciliation, Iranian Foreign Minister Javad Zarif said on Sunday. At the same time, Riyadh “fuels terrorists, wages war on Yemen, blockades Qatar [and] foments crisis in Lebanon,” Zarif tweeted. The Iranian diplomat posted his statement after a new round of talks with his Russian and Turkish counterparts, Sergey Lavrov and Mevlut Cavusoglu, respectively who met in Antalya, Turkey, on Sunday to discuss the Syrian conflict.

On Wednesday, the president of Iran and Turkey are set to meet with Russian president Putin in Sochi, where a day after a previously undisclosed meeting with Syrian leader al-Assad, Putin will seek to formalize the end of the Syrian civil war and establish the framework for the future in the middle east, one which certainly will include a prominent role for the Kremlin which has eagerly stepped into the power vacuum left by the receding US presence from the region.