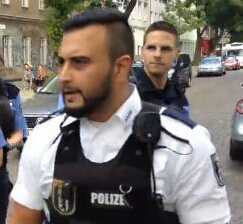 – GERMAN POLICE RECRUIT INSTRUCTOR: “I am afraid of my Muslim police recruits and so are my colleagues:

The Berlin Police Academy seems to have lost control of its recruits, now that at least half of them are Arab or Turkish Muslims. From a secret recording, we learn: “Not only are these Muslim recruits rude, ignorant, and inarticulate, they are violent and constantly threatening to beat up the instructors. They will never be our colleagues, they are the enemy.”